Jurassic Park III: Park Builder
Jurassic World: Alive
Ornithomimus is an ostrich dinosaur from the Late Cretaceous period of Colorado and Montana. These dinosaurs were slender, light, and probably extremely fast. While there has always been disagreement over their diet, it has been thought that they used their signature bony beak to either pluck vegetation or attack prey.[1]

Ornithomimus appeared in the website Jurassic Park: Institute on Dinopedia.

Ornithomimus was planned to be featured in the video game Jurassic Park: Operation Genesis but got cut out before the game was released.[2]

Ornithomimus is nr. 029 of the Carnivore Ones that can be created Jurassic Park III: Park Builder.

Ornithomimus is a rare in Jurassic World: Alive.  An interesting feature to the Ornithomimus in the game is that it has fur-like feathers and even wings, which it had in reality. It is surprisingly punishing in damage output for a Non-Exclusive Rare dinosaur. 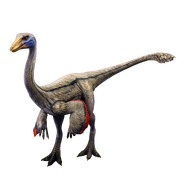