Ostafrikasaurus can be created in the game. It is currently only known from a single tooth, so the model in the game is currently conjectural. It is unlocked in battle stage 41 and can be later bought by 3,190 DNA. Its movement and basic appearance is the same as Spinosaurus, Suchomimus, and Irritator. 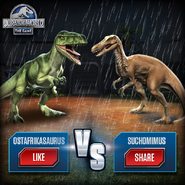 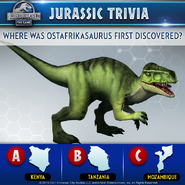