Ostaposaurus is one of the hybrids that can be created in the game. It was added to the game as part of the March 16th, 2016 update. It is first unlocked by fusing a Level 40 Ostafrikasaurus and a Level 40 Microposaurus together. 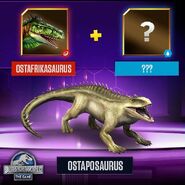 The Ostaposaurus in Jurassic World: The Game makes a variety of different sounds: including the growls of a lion, a tiger, and a leopard, and the grunts of a rhino, pig, and walrus.