Ouranosaurus was originally supposed to appear in the Riverside scene for Jurassic Park III but it was cut from the film.

It is revealed that there were wild populations of the Ouranosaurus on Isla Nublar for at least some time after the destruction of Jurassic World in 2015. The exact attraction in which it was included is unknown, however, as the Ouranosaurus was not mentioned in any of the official advertising brochures for the park.

Ouranosaurus appears in the series for the first time. However the populations on Isla Nublar displayed aggressive behavior towards the campers, although the exact reasons for this are unknown (it can be presumed to the animals reacting to the presence and attacks of the Scorpios rex).

In Safe Harbor, the campers are attacked by an Ouranosaurus pair while searching for supplies in the docks. One of the Ouranosaurus engages in a brief confrontation with Bumpy. However the Ouranosaurus is easily defeated and accepts its defeat.

The campers arrive at the boat and depart from the mainland, but are pursued by the Ouranosaurus pair. They manage to scare off the pair using fireworks. The two Ouranosaurus do not pursue the campers any further and make their way back to shore. At some point after they reached the shore, the Scorpios rex killed the pair.

In Eye of the Storm, a spooked Ouranosaurus is seen fleeing alongside other terrified herbivores, presumably from the Scorpius rex.

It is not known if the species survived until 2018, and if so, whether they were a transported to the Lockwood Manor, escaped the island by swimming to different lands, or became extinct.

It is possible that Ouranosaurus could have been created or transported somewhere around the world by 2022. 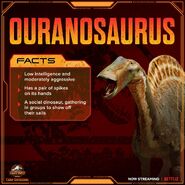 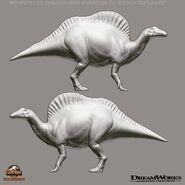 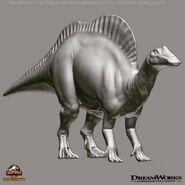 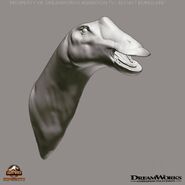 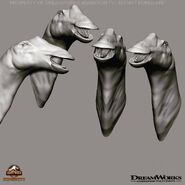