Oviraptor is a very unique dinosaur with some rather strange features. Instead of teeth it has a beak and something not seen in any other dinosaur: a pair of teeth in the roof of its mouth. The reason it got its name is that when it was first discovered Oviraptor was sitting on a nest of eggs. It was thought it was stealing the eggs of another dinosaur. Years later, it was found that the eggs were its own and that it was trying to protect them from an approaching sandstorm.

Oviraptor has another unusual feature - it has a thin crest of bone on its forehead. This crest seems to have grown and changed throughout its entire life. It may have been used as a form of individual identification or to differentiate gender. Also, different species of the Oviraptor genus had different crests. It is not clear what Oviraptor ate. Though it probably still included the eggs of other dinosaurs, it had very strong jaws, making some think that it would have eaten shellfish that it could easily crack open. Others argue that it must have been an herbivore as its skull did not show characteristics for meat-eating.

Oviraptor is briefly mentioned in the original novel. However, it wasn't one of the dinosaurs cloned by InGen. It also appeared in some video games.

During a flashback of the Cretaceous, an Oviraptor was raiding a nest of eggs from an unknown dinosaur, one of which the dinosaur ate in the process before getting momentarily distracted by another dinosaur's call (possibly the owner of the eggs). 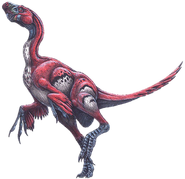 In Jurassic Park, Oviraptor is one of the smaller predators Alan Grant expects to find fossils of at his Dig site at Snakewater. These creatures could have fed on the eggs of the large Hadrosaurid herd that was nesting there. It should be noted that Oviraptor didn't live in North America, but in Mongolia.

It could be that the creatures feeding on the eggs were Haygryphus or Chirostenotes (both lived in North America at the same time as hadrosaurs). Some hadrosaur species did live in Oviraptor‘s time and place, such as Nipponosaurus, Charonosaurus, Saurolophus, and Shantungosaurus. 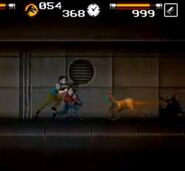 An Oviraptor from Jurassic Park 2: The Chaos Continues.

Oviraptor appeared as an enemy is the Game Gear version of The Lost World: Jurassic Park.

Oviraptor is no. 037 of the Carnivore Ones that can be created in Jurassic Park III: Park Builder.

Oviraptor appears in Jurassic World: Alive as a Cunning Rare creature. It was added in the Update 2.4 on January 19, 2021. 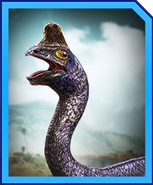