Pachycephalosaurus is the last, largest, and most famous member of the pachycephalosaurs, or thick-headed dinosaurs. In the 1970s, paleontologist Peter Galton proposed that male pachycephalosaurs used their dome heads as battering rams, like bighorn sheep. The idea caught the public's imagination, and two individuals are seen doing this in The Lost World: Jurassic Park (of course, these are genetically engineered dinosaurs and not necessarily exactly the same ones that lived 70 million years ago!). But by the 1990s, scientists began to question Galton's head butting theory. It was pointed out that animals who do butt heads have a wide surface area where the heads come into contact to prevent "head slippage." This happens when two animals butt heads at high speed and do not hit straight on. The risk of breaking their necks when their heads suddenly snap to one side. Pachycephalosaurus has a domed, or rounded, head, which would minimize surface contact and therefore increase the risk of head slippage. This throws doubt on the idea of any high speed head-butting between pachycephalosaurs, but it does not exclude "head-pushing" of "head-ramming" against non-pachycephalosaurs.[1]

Recent evidence suggests that Pachycephalosaurus and possibly other pachycephalosaur species were more omnivorous than previously thought, consisting of both plants and meat due to the teeth they have in their mouths.

Nine Pachycephalosaurus were created by InGen inside their compound on Isla Sorna where they were taken care of by the workers there at a young age.[2]

InGen's Pachycephalosaurs are much larger than the real creature.[3]

Their skin was mostly dark brown with a white underbelly and with dark blue markings.

It was not planned for InGen's Jurassic Park on Isla Nublar.[4]

When Hurricane Clarissa hit Isla Sorna, the InGen workers evacuated the island.[5] The Pachycephalosaurs were either freed by the fleeing workers or broke free themselves. From this point on, the Pachycephalosaurs and many of InGen's dinosaurs integrated themselves into Isla Sorna's ecosystem. To fight the Lysine contingency, they would eat Lysine rich plants.[5]

Pachycephalosaurus was known to have lived in the island's south.[6]

During the game trail harvest, the InGen hunting team captured a juvenile Pachycephalosaurus on the Game Trail.[7] It was nicknamed "Friar Tuck" because their leader Roland Tembo was unable to pronounce its genus name.[5]

In the struggle, the creature briefly managed to escape and charged forward at a hunter taking cover behind a car door. The Pachycephalosaurus knocked one hunter aside as it went, and realizing what was about to happen, the other hunter tried to take shelter in his jeep. Unfortunately, the animal slammed into the car door before the man could pull his legs into the car, crushing his legs in the door in the process. The Pachycephalosaurus was eventually subdued and captured by the hunting team.

This individual was later freed by Gatherers Dr. Sarah Harding and Nick Van Owen, though it is unknown if it survived.[5]

"Why are the west plains closed? "
"Another Pachy roaming outside its zone."
—Claire Dearing and Vivian Krill(src)

A new set of clones was created by InGen for Masrani Global Corporation's Jurassic World. The website says the new clones were close to the size of the originals, though this is incorrect. The websites' skin was dark red with lime spots and a lime underbelly.[8] They resided in the self-titled Pachy Arena where visitors could watch them have on of their famous head-butt duels. Everytime they butt heads, their inplants became temporarily disabled, which allowed the Pachycephalosaurus to escape the Pachy Arena without being tracked.[3]

Before the 2015 Isla Nublar Incident, an adult Pachycephalosaurus broke out of the Pachy Arena but was tranquilized and returned to the paddock by some Asset Containment Unit workers.[3]

While not in the film there were surviving Pachycephalosaurus populations on Isla Nublar. The surrounding foothills of Mount Sibo were the favoured territory of Pachycephalosaurus along other dinosaurs, which was at the top of the critical exposure list. At the end of the film, when the dinosaurs are released a few Pachycephalosaurus are heard in the background. It is possible a few were saved from extinction. 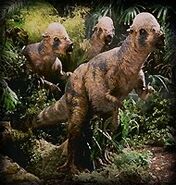 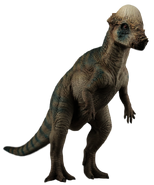 The practical effect of the Pachycephalosaurus seen in The Lost World: Jurassic Park was sculpted and painted by Scott Stoddard and was mechanized by Jeff Edwards and Rich Haugen. There were three versions that created and employed for use in the film. These three variants were a full-sized hydraulic puppet, an insert head, and an animatronic of the Pachy in a ramming stance for when it headbutts one of the vehicles of the InGen Hunters. The animatronic was eight feet long and five feet tall.[10] The Pachy has only 2 apperances.

Pachycephalosaurus was the only dinosaur in the Round Up scene that was not purely portrayed with CGI with an animatronic being used in close up shots.[11]

In The Lost World (the only movie in which it vocalized), the Pachycephalosaurus consisted several vocalizations which some sounded much aggressive or ominously threatening. The vocals are portrayed as raspy or blunt consisting of squawks or bleats from both Vultures, Sheep, Goats; and moans from a Camel and Rhino.[citation needed]

It was confirmed by Jack Ewins during a live stream that the Pachycephalosaurus seen on the security camera in Jurassic World was an adult specimen, and that the smaller specimen seen in The Lost World was a juvenile. This was later reaffirmed through his Twitter account. 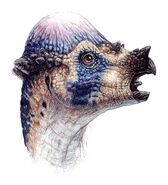