Pachycephalosaurus is an unlockable dinosaur in Jurassic World Evolution.

Pachycephalosaurus fossils are unlocked once the player __.

They live in moderate social groups to survive predation and also prefer to have a variety of other dinosaurs nearby.

They like good sized open grassland areas with a slightly smaller coverage of forest.

They are vulnerable to most predators but can defend themselves against small carnivores.

Pachycephalosaurus was a pachycephalosaur (or thick-headed dinosaur) that lived in North America. It was one of the last non-avian dinosaurs before the Cretaceous-paleogene extinction event about 65 million years ago.

It is distinctive for the reinforced dome of its skull, leading to speculation that they used to fight each other by head-butting. This has more recently been countered with the suggestion of flank-butting.

Pachycephalosaurus fossils may have been discovered in 1850 in the Lance Formation in south-eastern Montana. Early finds were fragmentary, but more complete specimens have recently been discovered.

Pachycephalosaurus lived on what were floodplains. Its sharp separated teeth would have made it ideal for a mixed-plants diet, and capable of shredding leaves. 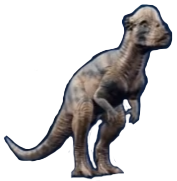 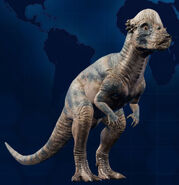 Add a photo to this gallery
Retrieved from "https://jurassicpark.fandom.com/wiki/Pachycephalosaurus/JW:_E?oldid=221364"
Community content is available under CC-BY-SA unless otherwise noted.