Pachycephalosaurus is an available dinosaur on the iOS and Android application, Jurassic World: The Game as a rare herbivore.

It is unlocked by beating battle stage 21. More individuals can be purchased in the market for 590 DNA or found through card packs.

As of September 30th 2015, a level 40 Pachycephalosaurus can be fused with a level 40 Nasutoceratops to make the hybrid Pachyceratops.

"Did you know that Pachycephalosaurus, while a mouthful to say, means 'thick-headed lizard'?"

"Pachycephalosaurus has an extra thick skull to protect their brain when they ram their heads together in battle!"

"Jurassic World's Pachycephalosaurus are closer to the original in size, standing a 6 feet in height and weighing 990 pounds!"

"By butting heads, the Pachycephalosaurus frequently disable their implants, allowing them to temporarily escape their enclosure!" 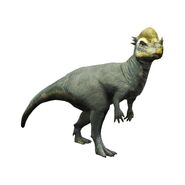 Pachycephalosaurus Old Card
Add a photo to this gallery
Retrieved from "https://jurassicpark.fandom.com/wiki/Pachycephalosaurus/JW:_TG?oldid=231808"
Community content is available under CC-BY-SA unless otherwise noted.