Jurassic Park: Builder
Jurassic World: The Game
Paraceratherium (also known as Baluchitherium, Indricotherium, Aralotherium, Pristinotherium, and Caucasotherium) is an extinct genus of hornless rhinoceros, and one of the largest terrestrial mammals that has ever existed. It lived from the early to late Oligocene epoch (34–23 million years ago); its remains have been found across Eurasia between China and the former Yugoslavia. Paraceratherium is classified as a member of the hyracodont subfamily Indricotheriinae. Paraceratherium means "near the hornless beast", in reference to Aceratherium, a genus that was once thought similar.

Paraceratherium can be created in the Glacial Park of Jurassic Park: Builder under it's junior synonym Indricotherium. 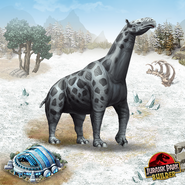 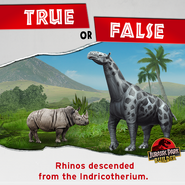 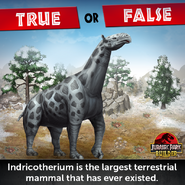 Paraceratherium is a Legendary Savannah creature that can be created in Jurassic World: The Game under its' junior synonym Indricotherium. However, the correct name of the genus is mentioned in one of the evolution facts for the animal as well as one of the facts for its close relative Urtinotherium. 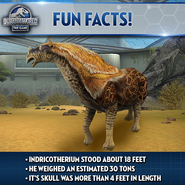 The base form of Paraceratherium in Jurassic World: The Game looks similar to the Walking With Beasts version.

Retrieved from "https://jurassicpark.fandom.com/wiki/Paraceratherium?oldid=263860"
Community content is available under CC-BY-SA unless otherwise noted.