"The one...The one with the big red horn, the pompadour. Elvis!"
—Roland Tembo(src)

Parasaurolophus is a genus of hadrosaurid (sometimes referred to as the hadrosaurs or duck-billed dinosaurs) from approximately 76.5–73 million years ago (late Cretaceous). It is a herd animal feeding on the park’s rich vegetation. The most stunning feature of the Parasaurolophus is the crest on its head. Scientists were unsure of its function until today. Some believed it was a snorkel for when the animal was in the water, others felt that it was used in combat. We now know that it serves for display and for communication, allowing the animals to remain in contact over distance by amplifying their loud cries.[1]

Parasaurolophus was created by InGen[2] in their compound[3] on Isla Sorna where they spent their early lives being raised by the workers there.[4][3]

The clones resembled the species Parasaurolophus walkeri but were shorter than the original animal, being 7 meters (23.25 feet) in length instead of 10 meters (33 feet).[5] Although the clones are capable of walking on all fours and two legs, it mostly stood upright, nearly dragging its tail, unlike the original.

They had three skin variations, beige,[4] greenish,[2] and beige green.[3] The ones seen in the Brachiosaurus Enclosure were also a greenish color with black stripes.[2]Their crests would vary in color as well, with some having black,[4] while others had dark gray crests.[3]

When the clones were a few months old they would be transported to the neighboring island Isla Nublar to live as an attraction for InGen's Jurassic Park. They lived in the Brachiosaurus Enclosure.[2] 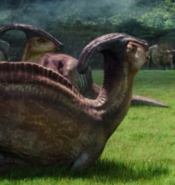 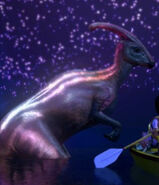 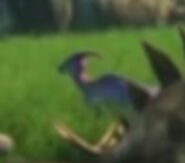 Inside Jurassic Park's Visitor Center is a mural depicting Parasaurolophus. The depiction is somewhat different than the Parasaur clones that have been encountered. They display the two species Parasaurolophus cyrtocristatus and Parasaurolophus walkeri. The P. walkeri are depicted as dark green with the front half of the crest being a dark red with its body bearing a single black stripe. The P. cyrtocristatus have a different color scheme being a lime color with the upper body being a dark green albeit split in the middle.

This mural is based on an old belief that P. walkeri and P. cyrtocristatus were not separate species but rather represented the male and female respectively of one single species. Seeing as how there is no evidence of P. cyrtocristatus (or at least clones that resembled this species) ever being created or encountered as well as the fact that the mural depicts Velociraptors as dark green that also has no evidence of ever being created or encountered like the previously mentioned Parasaurolophus species, it can be safely assumed that this is simply an artistic rendering rather than evidence that P. cyrtocristatus was recreated by InGen.

The endorsement team saw a herd of Parasaurolophus at the Watering Hole of the Brachiosaurus Enclosure once they arrived on Isla Nublar.[2]

When Dennis Nedry disabled Jurassic Park's security systems, the Parasaurolophus in the Brachiosaurus Enclosure were able to roam freely.[2]

It is unknown what happened to the Parasaurolophus populations on Isla Nublar after the Jurassic Park incident.

However, according to information revealed by InGen reports, there were at least 9 surviving Parasaurolophus on the island over there in October 1994.[7]

When Hurricane Clarissa hit Isla Sorna, the InGen personnel evacuated the island with the Parasaurolophus that were under their care being freed by them or by the hadrosaurs freeing themselves. In the wild, they countered the Lysine contingency by eating Lysine rich plants.[4]

They had a wide range of territory on the island. In the east, they coexisted with Gallimimus, Pachycephalosaurus, and Mamenchisaurus.[4] In the west, they lived alongside with Ankylosaurus, Brachiosaurus, Stegosaurus, and Triceratops, later even forming mixed herds with the related hadrosaur Corythosaurus.[3] When Roland and Ajay entered the T-Rex nest a dead Parasaurolophus was spotted and was probably one of the big predatores earlier victims.

The InGen Hunters captured a male Parasaurolophus[8] that their leader, Roland Tembo, named Elvis because its crest resembled a pompadour like Elvis Presley had. This individual would later be freed by Gatherers Nick Van Owen and Dr. Sarah Harding the following night it was captured by the hunters, though it is unknown if the Parasaurolophus survived.[4]

In 1999, InGen was in possession (or had created) an infant Parasaurolophus. When Simon Masrani went to oversee the genetics company a year after he had purchased it, he got to hold the young Parasaur.[9]

The Tyrannosaurus was seen eating a dead Parasaurolophus.

When the search group for Eric Kirby was running from the Velociraptor pack who they encountered in the InGen Compound that Billy Brennan (one of their members) stole eggs from, they ran through a mixed herd of Parasaurolophus and Corythosaurus that was outside the InGen Compound.[3]

Later, Parasaurolophus was one of the many dinosaurs that Dr. Alan Grant and the Kirby family saw on a riverbank.[3]

Parasaurolophus was one of the many dinosaurs that lived as an attraction for Masrani Global Corporation's Jurassic World. Because of their close resemblance to the previously created clones, it is possible that those that lived in the park originated from the dinosaurs transported from Isla Sorna in 2004.[10] However, the images on Jurassic World's website depict them with a longer and more curved crest. On the website, its skin was a mixture of tan and brown with the crest and the upper part of the head being mint green.

The juveniles, unlike the originals, had crests at an early age.[11]

They lived in the Gyrosphere Valley, Cretaceous Cruise, Gentle Giants Petting Zoo,[11] and the Gallimimus Valley.[12]

During the Jurassic World incident, while Gray and Zach Mitchell and Claire Dearing were talking to each other, a Parasaurolophus hologram from the Holoscape in the Innovation Center was made.

A Parasaurolophus made brief appearances in the Cretaceous Cruise and the Gentle Giants Petting Zoo.

Gray and Zach saw several Parasaurolophus during their time in the Gyrosphere Valley. While Zach and Gray looked at the open gate for perimeter fence #5, two Parasaurolophus were seen fighting and honking at each other in the background.[11]

It has been revealed that there are surviving Parasaurolophus populations on Isla Nublar, but they and many other dinosaurs faced an impending danger in the form of an erupting volcano. The surrounding foothills of Mount Sibo were the favoured territory of Parasaurolophus, which was at the top of the critical exposure list.

One Parasaurolophus could be seen swimming in the ocean when Mount Sibo erupts. It attempted to climb onto a rock, but loses its grip and is hit by a falling rock, presumably killing it. Some Parasaurolophus were captured and taken to Lockwood Manor to be sold off in auction, but thanks to Claire and Maisie, they would eventually escape the estate along with the other dinosaurs.

Parasaurolophus makes a brief cameo in the short, drinking at a river while a group of fisherman canoe past it during the end credits. 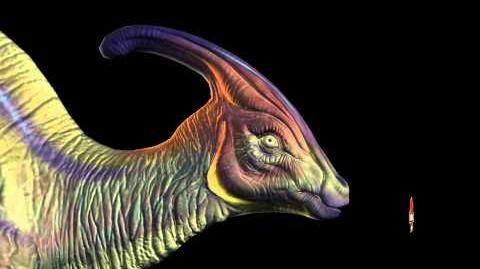 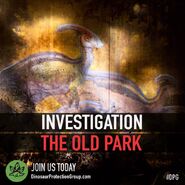 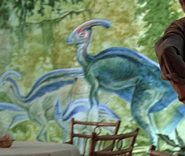 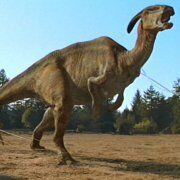 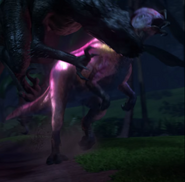 Parasaurolophus was one of the many dinosaurs created by InGen on Isla Sorna for Jurassic Park that later went wild. It is presumed that most of the clones history was the same as the first three films. One Parasaurolophus was known to have had green and blue scales and was apparently nocturnal.[13]

This same Parasaurolophus was startled by the arrival of Simon Tunney and his group on Isla Sorna.[14]

Parasaurolophus, despite appearing physically in the first three films, is absent from the scripts of the aforementioned films, or is at least not mentioned by name. In Jurassic Park, the Parasaurs appear to have filled the role of both Hadrosaurus and Maiasaura from the novel, most notably the former as both Hadrosaurus in the novel and Parasaurolophus in the film lived alongside a species of sauropod at a watering hole.

When creating the concept art for the Parasaurolophus featured in the first film, Mark "Crash" McCreery used a duck's bill as a reference when creating the hadrosaur's mouth and the eyes of a deer to make the dinosaur seem quiet and docile.[15] Two proposed colorations were made by "Crash" McCreery. One was a beige color with a dark gray crest and back with dark brown stripes on the thigh and the other's coloration had the whole head and neck as red, the torso being a darker tan with some of this tan being on its back instead of black like the first coloration and the stripes on its thigh being black as opposed to dark brown.[16] The final film's Parasaurs have greenish colored skin with a black back and seemingly lacks striping while its other details are unidentifiable due to the duckbill dinosaurs being difficult to see clearly. TyRuben Ellingson painted the digital maps used for the color of the Parasaurolophus as well as the Brachiosaurus in Jurassic Park.[17] At one point, sexual dimorphism was considered, with the species P. walkeri being the males and the females being the species P. cyrtocristatus. The mural of the dinning room featuring Parasaurolophus painted by Doug Henderson[18] still utilizes this scrapped idea.

Oddly, the section "Exploring Jurassic Park Part 2" of the Topps comic Jurassic Park II and the Jurassic Park Topps card for Parasaurolophus states that it was cut from Jurassic Park[19][15] even though a herd can be seen at the Watering Hole with Brachiosaurus.

An alternate opening to The Lost World: Jurassic Park was for a Japanese fishing boat to pull up a Parasaurolophus carcass in its net, to which the net breaks from the weight of the carcass and disappears into the waters below.[20] Paul Mejias supervised the construction of this sculpture[21] and even though this alternate opening scene never made the final cut, the eighteen-foot carcass was still used in the film in the scenes taking place in the Tyrannosaurus nest and the boneyard.[22] It was later repainted for Jurassic Park III[23] to represent the carcass that the T. rex was eating.[24]

In the script for The Lost World: Jurassic Park, instead of the Parasaurolophus Elvis, Dieter Stark captures a Corythosaurus[25][26] (misspelled "Carninthosaur" in the script).[27] Though this scene was cut from the final film, it is included in Mighty Chronicles adaptation of The Lost World Jurassic Park.[28] This early design choice is also referenced in the film itself with one of the Hunters carrying a factsheet of Corythosaurus[29] and Roland even misidentifies the Parasaur Elvis as a corythosaur, but is unable to pronouce it.[30]

Ditto. This concept was primarly used in The Lost World: Jurassic Park.

Paul Mejias sculpted and painted a 1/7th scale model from one of McCreery's designs[31] that stood 17 inches tall.[32] Unlike the concept art, this painted maquette was a bright yellow. The head was also not completely red, with the crest being black and the only red found on its body being only on the back of its neck. Ultimately, the final sequence would feature the color of Parasaurolophus as having more of an earth tone and less red on the neck.[33] A further two maquettes were made to reflect the change to earth tones with one having less red on the back of the neck than the other, the one with less red on the neck being nearly identical to the color scheme seen in the finished film.[34] Another fully poseable maquette was created to serve as a reference for modeling the full sized carcass.[35]

The vocalizations of Parasaurolophus for The Lost World: Jurassic Park were created from cows calling through tubes.[36]

Despite its appearances usually being little more than cameos, Parasaurolophus has physically appeared on-screen in all five films of the Jurassic Park franchise, a distinction shared with the more famous and iconic Tyrannosaurus, Triceratops, and Velociraptor. 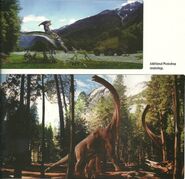