Parasaurolophus is an unlockable dinosaur in Jurassic World: Evolution.

Parasaurolophus fossils are unlocked once the player ___.

Parasaurolophus is a hadrosaur which eats moderate amounts from ground herbivore feeders.

They live in large social groups to survive predation and like to have dinosaurs from other species nearby.

They live in good sized grassland areas with a slightly smaller coverage of forest.

They are vulnerable to all predators.

They are able to move on two or four legs.

The first identified fossils for Parasaurolophus came from near Sand Creek, along the Red Deer River in Alberta, Canada. Since then further fossils were located in the Fruitland Formation of New Mexico in North America, and the Kaiparowits Formation in Utah.

Species of Parasaurolophus can be found across much of North America. In Atlanta the climate was warmer than today, with rivers and floodplains leading into marshes. Conifers formed the common canopy, with ferns, tree ferns and angiosperms for the lower brush.

In New Mexico the environment was predominantly swampy in the region, and silted in the lowlands of the region.

The known sites in Utah bordered the Western Interior Seaway, which once separated the two landmasses of what is now North America. The region was wet and humid, with peat swamps, ponds and lakes upon an ancient floodplain. 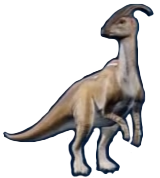 Add a photo to this gallery
Retrieved from "https://jurassicpark.fandom.com/wiki/Parasaurolophus/JW:_E?oldid=231242"
Community content is available under CC-BY-SA unless otherwise noted.