Parasaurolophus can be created in Jurassic World: The Game as a super rare herbivore.

It is unlocked by completing the Earth Shattering event. More individuals can be purchased in the market for 1,200 DNA or found through card packs.

As of June 29, 2016, a level 40 Parasaurolophus can be fused with a level 40 Bonitasaura to create the hybrid Parasaura.

"The Parasaurolophus roam freely on Isla Nubar and Isla Sorna, usually in the company of other herbivores."

"Did you know that the Parasaurolophus can communicate by pushing air into its crest to create a deep sound?"

"Greek for 'near crested lizard', the Parasaurolophus gets its name from its distinct horn-like crest, which resembles Elvis's hair!"

"When Parasaurolophus fossils were discovered, its crest attracted wild ideas, includin a weapon, a snorkel, and even a nose!" 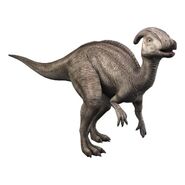 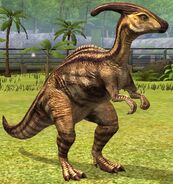 Add a photo to this gallery
Retrieved from "https://jurassicpark.fandom.com/wiki/Parasaurolophus/JW:_TG?oldid=236229"
Community content is available under CC-BY-SA unless otherwise noted.