Pelecanimimus was an ancestor of the Ostrich-like Dinosaurs. It was found unexpectedly in Europe. Unlike most of the other Ostrich Dinosaurs, Pelecanimimus had 5 millimetre long teeth and had more teeth than any other member of the Ornithomimosauria (this is surprising, however, since it is unikely for members of the ornithomimid famiily to have any teeth). The Pelecaniminmus was 6.5 – 8 ft long, and had 220 teeth. Soft-tissue remains preserved by the exceptional preservational environment of the La Hoyas lagerstätte revealed the presence of a small skin or keratin crest on the back of the head, and a gular pouch similar to the much larger pouches found in modern pelicans, from which Pelecanimimus took its name. Pelecanimimus might have been much like a modern day crane, wading out in lakes or ponds using its claws and teeth to capture fish and then storing them in its skin flap. Some parts of the impressions revealed wrinkled skin, interpreted as lacking scales or feathers. Filament-like structures were also preserved; first interpreted as an integument, some of these were later seen as representing preserved muscle fibers. Pelecanimimus was also the first ornithomimosaur discovered with a preserved hyoidapparatus (specialized tongue bones in the neck).

Pelecanimus is a dinosaur the appears in Jurassic Park III: Park Builder.

Pelecanimimus is a dinosaur who appears in Jurassic World: The Game. It is classified as a herbivore in-game, although in reality it would have likely eaten fish. The game model also lacks a throat pouch in any evolution. 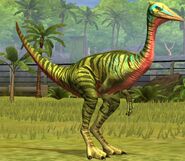 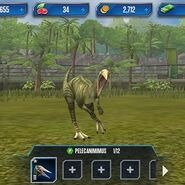 Retrieved from "https://jurassicpark.fandom.com/wiki/Pelecanimimus?oldid=232414"
Community content is available under CC-BY-SA unless otherwise noted.