Jurassic Park: Builder
Platecarpus was a mosasaur that lived in the Late Cretaceous period in. It lived in the seas of North America, Europe, and Africa. It grew up to 4 meters in length, with half of that length taken up by its tail. An exceptionally well-preserved specimen of P. tympaniticus known as LACM 128319 shows skin impressions, pigments around the nostrils, bronchial tubes and the presence of a high profile tail fluke, showing that it and other mosasaurs did not necessarily have an eel-like swimming method but were more powerful fast swimmers. The coloration of mosasaurs was unknown until 2014, when the findings of Johan Lindgren of Lund University and colleagues revealed the pigment melanin in the fossilized scales of Platecarpus. The studies revealed that mosasaurs were likely countershaded, with dark backs and light underbellies, much like a great white shark or leatherback sea turtle. Scales on the tip of the snout and the top of the skull are somewhat hexagonal in shape and do not touch one another. The scales on the jaws are longer and rhomboidal in shape, overlapping one another. The scales on the snout indicate that the nostrils were placed far in front of the skull at its tip and faced laterally as in most squamates and archosaurs. The body scales are all rhomboidal in shape and form tightly connecting diagonal rows that overlap each other at their posterior edges. They are generally the same size throughout the entire length of the body. The caudal scales on the tail are taller and larger than those of the rest of the body, although those covering the lower surface of the tail are more similar to body scales.

Platecarpus makes an appearance as a unlockable animal in the simulation game, Jurassic Park: Builder. 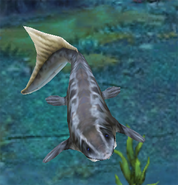