Platybelodon ("flat-spear tusk") was a genus of large herbivorous mammal related to the elephant (order Proboscidea). It lived during the Miocene Epoch, about 15-4 million years ago, and ranged over Africa, Europe, Asia and North America. Although it thrived during its time, it did not survive past the Miocene.

Platybelodon was previously believed to have fed in the swampy areas of grassy savannas, using its teeth to shovel up aquatic and semi-aquatic vegetation. However, wear patterns on the teeth suggest that it used its lower tusks to strip bark from trees, and may have used the sharp incisors that formed the edge of the "shovel" more like a modern-day scythe, grasping branches with its trunk and rubbing them against the lower teeth to cut it from a tree. Adult animals in particular might have eaten coarser vegetation more frequently than juveniles.

Platybelodon can be created in the Glacial Park of Jurassic Park: Builder. 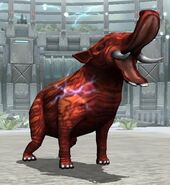 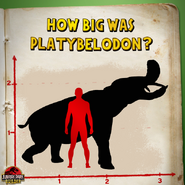 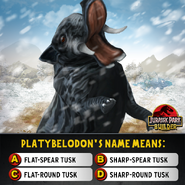 Retrieved from "https://jurassicpark.fandom.com/wiki/Platybelodon?oldid=209296"
Community content is available under CC-BY-SA unless otherwise noted.