Plesiosaurus was an extinct genus of marine sauropterygian reptiles that lived during the Jurassic Period. The type species of this genus is Plesiosaurus dolichodeirus. Skeletons are found in Europe.

Pleisiosaurus is distinguished by its small head, short snout, long and slender neck, broad turtle-like body, a short tail with a fluke at the end, and two pairs of large, elongated paddles. Plesiosaurus fed on belemnites, fish, and other prey.

Some traces of skin impressions discovered suggest that it had smooth skin, rather than scaly skin.

Plesiosaurus is one of the animals on the Holoscape inside the Innovation Center of Jurassic World, though it is currently unknown if any reside within the park itself.

Plesiosaurus is a carnivore that can be created from paleo-DNA in the game Jurassic Park III: Park Builder.

Plesiosaurus is a legendary aquatic surface that can be created from paleo-DNA in the game Jurassic World: The Game.

Plesiosaurus is set to appear in Jurassic World Evolution 2.

A metal figurine of a plesiosaur (together with a Iguanodon figurine in one box) appeared in the Die-Cast: Jurassic Park toy line in 1993. It also came with a card of Plesiosaurus.

Plesiosaurus will appear in the new series of the toy line as a Battle Damage action figure in 2019 based on Jurassic World: Fallen Kingdom. This will be the first time it will physically appeared in any Jurassic Park toy set. 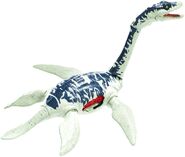 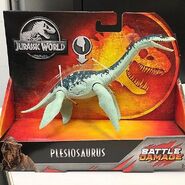 Plesiosaurus is seen having a board game piece of it in the Jurassic World Miniature Game. Unlike its real life counterpart, it has a sloped skull, a flexible neck, and lack of a tail fluke.

In the scrapped Jurassic Park animated series one of the ideas for scenes in the series was a Plesiosaurus pursuing Tim and Lex Murphy while they were in an inflatable boat.[1]

The Plesiosaur Pond was an attraction originally meant to appear in Jurassic World but was cut from the final film. It was to be a large pool like the Jurassic World Lagoon inhabitated by Plesiosaurus and several unidentified species of ichthyosaurs. Visitors to Jurassic World would be able to visit the attraction by boarding a submarine attached to a monorail.[2]