Postosuchus is an extinct genus of rauisuchid archosaurs that lived during the Triassic Period in what is now the Southwetern United States. It gets its name from Post Quarry, a place in Texas where Postosuchus was first discovered.

Postosuchus is a super rare amphibian that can be created in Jurassic World: The Game, even though in real life it was a terristrial reptile. It was added as part of the March 16th, 2016 update and can be acquired in a Super Rare pack, or by completing Battle Stage 70. When Postosuchus is in its pen, its tail rests on the ground. While other crocodiles did this, it is unlikely Postosuchus did this. With the legs under its hips like a dinosaur and unlike a semi aquatic crocodile, Postosuchus tail had to be above the ground for balance. Also, Postosuchus is shown to walk on four legs, whereas recent research suggests it likely walked on two.

Postosuchus will appear in Jurassic World: Alive. Postosuchus is shown to walk on four legs, whereas recent research suggests it likely walked on two.

The Postosuchus appears in the line based on Jurassic World: Fallen Kingdom, as part of the line's Mini Dinos assortment. This is the first time it has ever physically appeared in any Jurassic Park toy set. 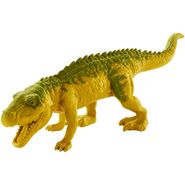 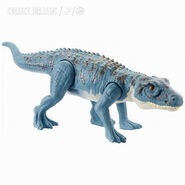 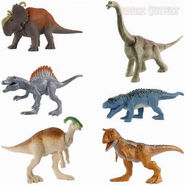