Back to page
View source

Jurassic Park: The Game
They enter the power plant, where Laura and Gerry climb the ladder to see if they can restart the main power system. Laura presses the "Push to Open" button in order to open the vents. Gerry tries to turn the valve that is required to vent the steam, to which he cannot move it. He asks for Yoder and Oscars help. After they still cannot turn the valve, Laura tells them to stop that that such force should not be required. Nima investigates the engine, to which she unlocks it out of place to allow the valve to move. Once Oscar turns the valve, Laura pumps the fuel and presses the "Push to Close" button, to which the system fails. The mechanical doors begin to close, trapping them in. Laura assures that things will be alright as there is a terminal on the ground that can start the system up. Unfortunately, before the metal doors close, the same Raptors from earlier (including the scarred one) get in. Nima quickly climbs up the ladder, but their only way of escape is through a door that is blocked by a mechanical door. Oscar realizes that the only way to open the door is to access the terminal, which is on the same level as the raptors.

Oscar asks Yoder to create a diversion, as he jumps onto some rocks near some lava in the hopes he can sneak by the raptors. Everything goes well until he reaches the terminal and is attacked by the raptors. Before he is killed, he manages to restart the system, opening the mechanical doors. Yoder is distraught at Oscar's death. Worse still, one of the raptors sees the rock ledges and figures out that they can be used to reach the upper level. Gerry, Laura, Jess, Nima, and Yoder all run for their lives. 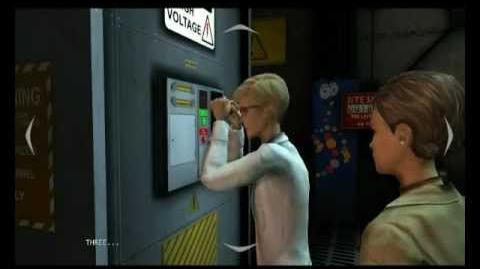