"The compys didn't look dangerous at first sight. They were the size of a hen and walked nervously like a hen. But he (John Hammond) knew that they were venomous. Their bites delivered a slow-acting poison that they used to kill wounded animals."
—Someone commenting on the Pro-compies(src)

Procompsognathus (pronounced /ˌproʊkɒmpˈsɒɡnəθəs/) is a genus of small theropod dinosaur that lived during the Late Triassic Period, about 222 to 219 million years ago. Procompsognathus was named by Eberhard Fraas in 1913. He named the type species, P. triassicus, on the basis of a poorly-preserved skeleton found in Württemberg, Germany.

Procompsognathus may have been about 1.2 meters long (4 feet). A biped, it had long hind legs, short arms, large clawed hands, a long slender snout with many small teeth, and a stiff tail. It lived in a relatively dry, inland environment and may have eaten insects, lizards, and other small prey.

In Michael Crichton's novels Jurassic Park and The Lost World, Procompsognathus (often referred to as "Compys") are one of the extinct species recreated through genetic engineering. Crichton portrays these dinosaurs, like Dilophosaurus, as having venomous saliva, a characteristic invented for the novel and (obviously) not supported by fossil evidence. Their saliva has a foam-like structure and has a high concentration of Serotonin; which can trigger an allergic reaction. Their venom has a mild narcotic effect, making the victim feel sleepy and drowsy, and altogether content. Another trait that the compies have in the novel is five-fingered hands, when coelophysoids only have four.

He also portrays them as scavengers and coprophagists (eaters of feces) useful in keeping the park clean of sauropod excrement, a well needed solution. They travel in large packs, and prefer to feed on small, solitary, crippled, dying, or dead animals when not feasting upon the copious amounts of feces left behind by InGen's larger creations. Compys have a tremendous sense of smell to find corpses.[1]

Compys normally don't walk in the night. At night they normally sleep in trees until dawn.[2]

Procompsognathus is the first dinosaur that appears in the novel. The Compys are able to escape the park through the river, which is not guarded with an Electric Fence or cameras, so they can reach the harbor and sneak into the boat that ferries between Isla Nublar and Puntarenas.

Three Compys kill a baby in a local hospital. A compy hurts Tina Bowman on a deserted beach. She showed an intense allergic reaction and is taken to the Clínica Santa María in Puntarenas. This triggers a series of investigations to the strange creature:

Clínica Santa María: saliva is investigated. It contained many proteins with a high molecular mass. But when Martin "Marty" Guitierrez identified the creature as a mere Basiliscus amoratus with a three-toed genetic anomaly the investigation is canceled. Martin Guitierrez then finds a half-masticated Procompsognathus and sends it to the Columbia University to be investigated by Dr. Ed Simpson. The University's Laboratory for Tropical Diseases analyzes the blood from the specimen. The blood showed no significant reaction to viral or bacterial antigen. A radiography photo of the specimen is sent to Alan Grant, who immediately identifies it as a Procompsognathus.

The University Laboratory of San José receives a saliva sample from the Clínica Santa María. The Saliva contained a high level of serotonin. The saliva contained a huge protein with a mass of 1.980 kiloDaltons. It turned out to be a primitive form of Cobra venom. They also found traces of gamma-amino methionine hydrolase.

In the chapter Bungalow, Harding encounters a pack of Compys running towards the body of Dennis Nedry, but has to call off his quarry before finding Nedry.

At the end of the novel, the main pack of compies find an injured John Hammond, who, with a broken ankle, is unable to walk, or even crawl. They ultimately finish him off after he passes out from their narcotic venom.

Most of them are killed in the napalm bombing and while the others somehow reach the mainland.

In The Lost World Procompsognathus is the first dinosaur encountered by Malcolm's expedition. The animals really scare Eddie Carr and make him worry about the preparations.

Procompsognathus is seen feeding on the feces of Parasaurolophus. Richard Levine sees that they only feed on fresh feces, which makes him think there is some kind of hormone in the fresh feces. When he takes a sample of the dung, a Compy bites him on his ear. Luckily it was a minor bite and he suffered no ill effects except a predicted "slight encephalitis".

Lewis Dodgson, while sleeping on the ground near the shed and the Tyrannosaurus rex nest after running away from the nest's parents, was attacked by some Procompsognathus before he escaped into the shed.

A group of Compsognathus stalk Dieter Stark when he gets lost in the jungle. Though they were most likely hunting him because he was alone, it is ironic that he is killed by them due to how he had treated at least two Compys cruelly earlier. This scene is the allusion to the death of John Hammond in the first novel and small details from Howard King's death in the second novel.

Procompsognathus appears in the game and its Rampage Edition counterpart as a minor enemy in most stages.[3]

"Compy is one of the old times' smallest dinosaurs about the size of a coyote, 10 pounds."
—Robert Bakker(src)

Procompsognathus appears in the game as one of the dinosaurs living in Jurassic Park. They are classified under the family Podokesauridae, which has since been changed to Coelophysidae. According to their bio, they can run 30 mph and are omnivorous. Like all dinosaurs in the game, the player must collect their eggs and place them in the incubator. 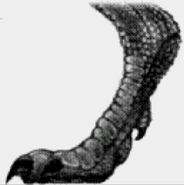 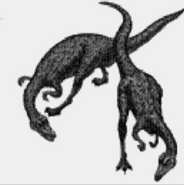 Ditto.
Add a photo to this gallery

Retrieved from "https://jurassicpark.fandom.com/wiki/Procompsognathus?oldid=237543"
Community content is available under CC-BY-SA unless otherwise noted.