Protoceratops is the first ancestor of the famous ceratopsian family to resemble the later, more famous members such as Triceratops. Roughly the size of a sheep, it was therefore much smaller than its more famous relatives but had a very successful design that lasted for many millions of years. Protoceratops didn't have horns to protect itself with, just its sharp beak to bite with.[1]

It is a fairly common fossil, being one of the few dinosaurs that's complete growth history can be seen in fossils ranging from an infant to an adult. Like other ceratopsians, each individual shows a difference in the size and shape of its frill. Protoceratops frills were not solid and did not grow overly large. Some scientists believe that the frills may have been brightly colored for display, either to intimidate attackers or for courtship. There are some fossils of this species that show a small horn on the snout. This is thought to be a gender differentiation.[1]

One of the most famous fossils ever found is of a Velociraptor and a Protoceratops locked in battle. They were both killed in the midst of a fight, most probably due to a sandstorm or flood. It is interesting to note that the species name, andrewsii, is for Roy Chapman Andrews. Roy Chapman Andrews was a very adventurous fossil hunter; the movie character Indiana Jones is based on Andrews' exploits.[1]

Protoceratops appears as a painting on the wall of Les Gigantes.

Protoceratops appears as a skeleton in the Lockwood Manor. 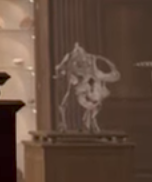 Protoceratops on a promotional poster for Jurassic World: Fallen Kingdom.

Protoceratops in the background behind the dead Indoraptor in Jurassic World: Fallen Kingdom

Protoceratops is mentioned in an educational book about Velociraptor as a prey item.

This Protoceratops was not involved in the incident in Glen Rose. It is unknown what happened to it after the incident, but it is likely that it was transported to either Isla Nublar or Isla Sorna with the other surviving dinosaurs, as Alan Grant suggested. 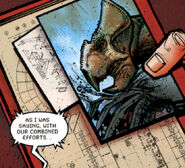 Protoceratops in Redemption I

Protoceratops can be created from paleo-DNA in the game Jurassic Park III: Park Builder.

Protoceratops is mentioned in the database entry for Velociraptor

Two Protoceratops appear as skeletons on the banner for the "Lockwood Library" arena.

A figure of Protoceratops and a repaint of this same figure were released as part of the toy-line for Jurassic World: Fallen Kingdom. This is the first time that the species has ever physically appeared in a Jurassic Park toy set. 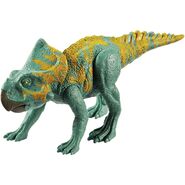