Protostega ('first roof') is an extinct genus of marine turtle containing a single species, Protostega gigas. Its fossil remains have been found in the Smoky Hill Chalk formation of western Kansas and the Mooreville Chalk Formation of Alabama. It is the second largest sea turtle that ever lived, just behind Archelon.

Protostega is a Reef and Super Rare in Jurassic World: The Game. 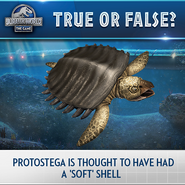 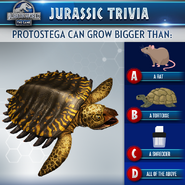 Retrieved from "https://jurassicpark.fandom.com/wiki/Protostega?oldid=237535"
Community content is available under CC-BY-SA unless otherwise noted.