Pyroraptor is the first positively identified member of the raptor family found in Europe. This was a small, fast hunter that lived near the end of the age of dinosaurs. The specimen is known from only a few bones, but they are enough to give scientists a good idea of what this little dinosaur would have looked like. Some paleontologists believe it would have closely resembled the small, bird-like dinosaurs recently discovered in China.

Pyroraptor was found associated with fossils representing a number of other creatures, including the iguanodont Rhabdodon, a nodosaur, a titanosaur, a ceratopsian, the abelisaurid Tarascosaurus and some Late Cretaceous reptiles.

The origin of the dromaeosaurs has long been debated. A number of prominent scientists believe they originated in North America, possibly the area that was adjacent to Europe in the very Early Cretaceous.[1]

Pyroraptor is featured in Jurassic World: Alive. Unlike most dromaeosaurids in the Jurassic Park franchise, this depiction of Pyroraptor has fur like feathers all over its body and even wings. 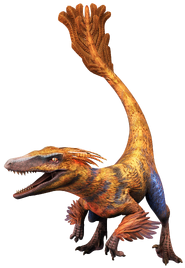 Retrieved from "https://jurassicpark.fandom.com/wiki/Pyroraptor?oldid=237526"
Community content is available under CC-BY-SA unless otherwise noted.