Rajasaurus (meaning "king" or "king of lizards") is a carnivorous abelisaurian theropod dinosaur with an unusual head crest. Between 1982 and 1984, its fossilized bones were discovered by Suresh Srivastava of the Geological Survey of India (GSI). Excavated from the Narmada River valley in Rahioli in the Kheda district of Gujarat, India, the find was announced as a new genus of dinosaur by American and Indian scientists on August 13, 2003.

Paleontologists Paul Sereno of the University of Chicago, Jeff Wilson of the University of Michigan, and Srivastava worked together as an Indo–American group to study the Narmada River fossils. The fossils represented the partial skeleton of the new species Rajasaurus narmadensis, which means "princely lizard from the Narmada Valley." The fossilized bones of Rajasaurus have also been found in the upriver region of the Narmada, at Jabalpur, in the state of Madhya Pradesh.

Rajasaurus can be created in Jurassic Park: Builder. Its DNA sample is rare and can only be acquired by playing Tournament Mode. 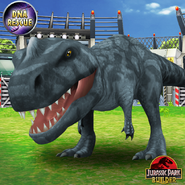 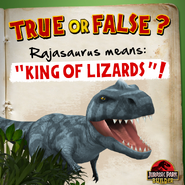 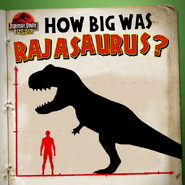 Rajasaurus is a super rare dinosaur found in Jurassic World: The Game. Unlike the real Rajasaurus, the game depicts it with two fingers instead of four fingers. 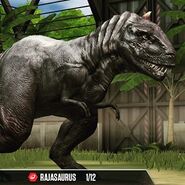 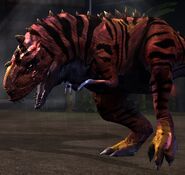 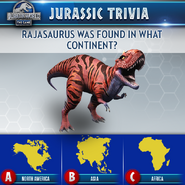 Rajasaurus will be in Jurassic World: Alive.

The Rajasaurus appears in a toy line based on Jurassic World: Dominion, as part of the "Roar Strikers" assortment. This will be the first time it has ever physically appeared in any Jurassic Park toy set. A second and repainted version is set to be released in September.