Jurassic Park: The Game
In Raptor Chase the two groups will come together again. They will discover that the Geothermal Power Plant is malfunctioning and that they have to repair it. Jess and Gerry will have a revealing argument at the end of the scenario.

Gerry and Laura are still heaving an argument about the dinosaurs. Jess sneaks away again through a door. This time, it is revealed she sneaks away to have a smoke. As she lights the lighter, a raptor appears and scares her. She throws the cigarettes into its mouth and runs out the door to Gerry.

The raptor opens the door and Gerry grabs a pole to the side of him. He smacks the Raptor with it, to which more Raptors come crashing through the door. Jess finds a moving vehicle, starts it up and slams into the raptors.

Jess, Gerry, and Laura run from the raptors, but then Oscar barges through the door and swipes his knife on one of the raptors, giving it a scar over its left eye. In doing so, he scares the raptors away.

The two groups reunite, to which they are greeted to steam coming out of the pipes. Laura tells them that they need to get to the power plant so that it can be reset, or else the half the island could explode, killing everything in its path, themselves included. Oscar scouts ahead to see if there are any dinosaurs waiting for them, to which he returns with the all clear.

As they walk towards the plant, Oscar brings up a potential smoke break, to which Laura tells him that she can't find the cigarettes. Looking at Jess' face, Laura can see she has a guilty conscience. Jess then tells Laura that she took them, to which Gerry is furious with her. Gerry and Jess get into a family feud. While they do that, Laura tries to find a way into the power plant after the door is locked. The only way in is through a vent that only Jess can fit through. Laura breaks up the argument and tells Gerry that they need Jess to open the door from the other side. Gerry tells Laura that they'll have to find another way, but notices that Jess has yet again slipped away to open the door. 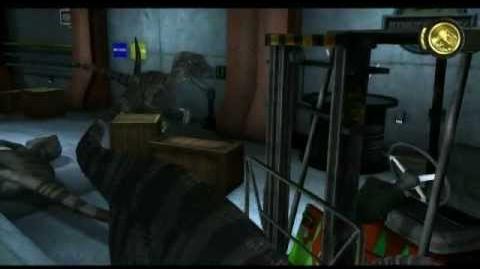