Reed is an antagonist in the third season of the Netflix TV series Jurassic World: Camp Cretaceous. He is a mercenary that works with Dr. Henry Wu and under Eli Mills.

He arrives on Isla Nublar with Wu, Hawkes, and another mercenary on a helicopter. They head to Wu's lab to retrieve Wu's laptop that contains years of his research. When Wu sees the scratches on the door, he says that they might need some extra protection inside. So Hawkes calls Reed over. They enter the E750 room, and learn that the Scorpius rex has escaped. Reed was going to touch the quills, but Wu stopped him. When they are unable to find Wu's laptop in Wu's lab, they decide to search other labs. But Hawkes stays and discovers the vents. He sees Brooklynn, and gives her to Wu. Then, Reed and Hawkes advance to Darius and Yasmina. Hawkes warns Darius and Yasmina and tells them to give him the laptop, and that he won't come any closer. But Reed gets his gun ready and tries to kill them but he comes face to face with Chaos and Limbo, and they devour him. 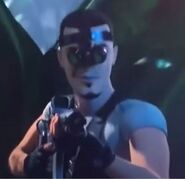 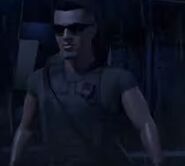