In honor of Rinchen Barsbold

Rinchenia is an extinct genus of oviraptorosauria theropod dinosaur that lived in Mongolia during the Late Cretaceous period.

Rinchenia appeared in the website Jurassic Park: Institute on Dinopedia.

Rinchenia is featured in Jurassic World: Alive as a cunning epic creature . This is the first time it has appeared in a game so far. 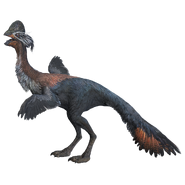