Robert Muldoon, was Jurassic Park's game warden. He was also the warden at John Hammond's park in Kenya. He was shown to be proficient with weaponry and was a skilled hunter. He was portrayed in the film as a cautious man and a bit of an alarmist. It can be assumed that he had worked with Hammond for a considerable amount of time and had gained Hammond's confidence as Hammond trusted him enough to let him bring back his grandchildren.

The film's script described him as being "grim-faced, fortyish and British; someone whose voice commanded attention." Muldoon expressed great concern over the Raptors, significantly as a result of one of his workers, Jophery, being killed by a Velociraptor when they were transferring it into the raptor pen. He was concerned for the safety of the guests as well and was worried that a tropical storm a few miles away would hit Isla Nublar. John Hammond described him as being a bit of an alarmist but knowing more about raptors than anyone.

When the power went out around the island, Hammond requested that Muldoon go out and find his grandchildren for him. Muldoon took up the task, accompanied by Ellie Sattler, who was concerned about Alan Grant's safety. When he and Ellie arrived at the T. rex paddock, they were astonished to find that the tyrannosaur had broken out of its pen, severely damaged one of the tour cars, and disappeared into the forest. After finding the grisly remains of Gennaro, they looked through the debris further and found an injured Ian Malcolm. Muldoon put Malcolm in the Jeep, while Ellie searched frantically for the first Park drive Land cruiser. Muldoon impatiently called to Ellie to hurry up, as the Tyrannosaurus could "wander in and out of any paddock it liked" with the electrified fences offline. At that moment, Ellie found the other Land cruiser, battered and tossed off the road and into the tyrannosaur paddock. They hurried down towards it, but Grant, Lex and Tim were already gone. The only clue to their whereabouts was their footprints, which led out into the park. It was around this time that Malcolm started to hear the familiar footsteps of the Tyrannosaurus rex. He yelled for Ellie and Muldoon, who were just coming up from below the security moat, the Tyrannosaurus bursting through the trees after them. After a lengthy chase from the T. rex, the trio made it back to the Visitor's Center, where Muldoon and Sattler tended to Malcolm's wounded leg, giving him a dose of morphine.

Sometime Sunday morning, Muldoon, Hammond, Arnold, Malcolm, and Sattler gathered in the control room. The situation looked bleak; Arnold still had not gotten past Nedry's bug, and Malcolm was in need of medical attention. Hammond suggested a calculated risk: turn off the main switch, turning off all the systems in the park, thereby erasing everything that Nedry did. Arnold was against the idea, feeling that there was no assurance that the system would restart. Muldoon suggested that they put the Lysine Contingency into effect, which would kill all of the dinosaurs in the park within 24 hours. His suggestion was denied harshly by Hammond and the choice was made to switch off the power. After seeing that the systems did, in fact, turn back on to their start-up screen, Arnold went off to the electricity shed to turn the electricity back on manually. Muldoon led the others to the visitor center security bunker, where they would wait for Arnold's return.

After some minutes, Arnold still had not returned from the shed, prompting Ellie to plan to go and turn the electricity on herself. Muldoon volunteered to go with her, saying "You can't just stroll down the road, you know." Taking his favored SPAS-12 shotgun with him, he and Ellie made their way out of the bunker and towards the shed. As they passed the Raptor Pen, Muldoon's worst fears were realized; the power had switched off all the fences, including those of the Raptor pen. The wires on the raptors' pen had been chewed through, and the three Velociraptors had escaped into the jungle. As Muldoon and Ellie slowly made their way through the trees, Ellie suggested that they could make it to the shed if they ran. Muldoon, however, knew that they could not, and he told Ellie exactly why: they were being hunted from the bushes up ahead. Muldoon told Ellie to run to the shed, while he stayed behind to fend off the raptors. By doing this, he probably saved her life.

After following a raptor deeper into the jungle, he quietly removed his hat and locked his shotgun's sight onto the Velociraptor. Muldoon was determined to kill the Velociraptors, something he thought he should have done a long time ago. As he was aiming at the Velociraptor, however, another raptor appeared in the bushes to his left. Muldoon, shocked and horrified yet impressed by this element of surprise, uttered the words "Clever girl..."., and attempted to turn his shotgun towards the attacker, only for it to dive out from the bushes and tackled him to the ground, viciously mauling him to death.

"Raptors are smart. Very smart. Believe me, all the problems we have so far are nothing compared with what we'd have if the raptors ever got out of their holding pen." - Robert Muldoon

In the novel, Robert Muldoon was an alcoholic. He was a famous white hunter from Nairobi and a consultant for wildlife preserves and zoos. As far as appearance, he was burly, with deep blue eyes and a steel gray mustache. He was fifty during the Jurassic Park incident and wore khakis. He was frequently at odds with his coworkers, especially the idealistic John Hammond. This was mostly due to Muldoon's own realistic view on Velociraptors and overall unromantic view of animals. Muldoon also disagreed with Hammond's irrational stance on the minimal amount of weapons present on the island. Hammond only permitted Muldoon to have one lethal LAW rocket launcher and another nonlethal custom-made tranquilizer on the island when he threatened to quit.

Muldoon's favorite time of the day was at 7 PM when the quartz lights lit up the park. His catchphrase, repeated to Donald Gennaro three times in the novel, was "Like to live dangerously?" He killed at least two raptors and the adult tyrannosaur during the course of the novel. He strongly disliked Dennis Nedry and even said "There is justice in the world after all," when he found Nedry's eviscerated body by the Jungle River. When searching for Hammond's grandchildren, Muldoon rescued Ian Malcolm and found Ed Regis' severed leg; he also concluded that Alan Grant and the children were still alive after he examined the wreckage of the attacked Land Cruisers.

After the power to the fences was restored, he and the maintenance crew went to repair the fences. It was then discovered that the adult Tyrannosaurus had made its way into the sauropod paddock. When Muldoon returned to the Visitor Center late that night, Hammond expected him to go out and retrieve the rex. Muldoon promptly refused, as there were no suitable weapons available for the job. This argument quickly escalated into a shouting match between him and Hammond outside of the control room. The next day, after Muldoon and Gennaro had found the rocket launcher that Nedry had taken, Muldoon successfully tranquilized the rex with great enthusiasm. He stated that he had wanted to "stick a needle" in the rex for a long time.

Soon afterward, John Arnold realized that the park had been running on backup power after the shutdown. The backup power did not generate enough power to keep the electrified fences in the park running; this included the fences of the raptor paddock. When Muldoon heard this, he quickly took charge, sending Arnold to the maintenance shed to restore the park systems. He told Wu to wait in the control room and start up the computer when the power returned and sent Hammond and Gennaro to the lodge with the others. Gennaro, although hesitant, decided to accompany Muldoon as he escorted Arnold to the shed. The three of them were separated when Muldoon blew up one of the Velociraptors with his rocket launcher and was subsequently pursued by a pack of raptors into a large drainage pipe. Hearing the noise of the raptors' attack on Muldoon over the radio, Malcolm commented that it sounded like a war out there. Muldoon eventually made it back to the Safari Lodge where Hammond, Wu, Sattler, Malcolm, and Gerry Harding were staying.

Later, Muldoon and Ellie Sattler attempted to bait the raptors to the lodge, so that Grant could turn on the power. Sattler was annoyed by Muldoon's drunken humor when he called out to the raptors "Dinner is served!" while attempting to attract them to the lodge. He also called Sattler "girl", which she is offended by. He accompanied the group to the raptors' nest later and made sure that Gennaro followed Grant and Sattler into the nest, even going to the extent of threatening him with a shock prod. He was later rescued by a helicopter where he gave the others the news of Hammond's death and Malcolm's alleged death. Robert Muldoon made it out of Jurassic Park with only a minor injury. Most likely, Muldoon was held up in Costa Rica with the other survivors until the government officials were finished questioning him.

Muldoon is not present during the doomed raptor transfer at the beginning of Issue #1 of the Topps comic series. Instead, the operation is overseen by an unnamed black-haired man with purple-tinted sunglasses (vaguely resembling Ian Malcolm although Malcolm doesn't appear until the helicopter scene in the comic, as in the film). The man is never identified and never reappears, and cannot be Muldoon who appears in Issue #2 at the raptor pen, drawn as he appears in the film. The identity of the black-haired man is unknown. Muldoon is also attacked by both raptors at once in the comic (quipping "Clever girls") and is visibly slashed across the face bloodily, instead of having the attack concealed by the bushes.

Robert Muldoon returned in the comic book Raptors Attack II and appeared in the rest of the series. He stated that he had been in recovery after surviving the raptor attack. It is unknown how exactly he survived the raptor attack and no scars or injuries were depicted on his person. He explained that another helicopter had come later and evacuated him and the additional workers who had survived the incident from Isla Nublar. He joined up with various members of the original movie's cast for a series of adventures. Muldoon remained the only main character who wanted to kill the Velociraptors throughout the comics. His intent to kill the raptors greatly disturbed Grant and Sattler, who wished to keep them alive. Muldoon also starred in a special issue of the Return to Jurassic Park series called Jurassic Jam, in which he had to get all the dinosaurs back to their paddocks after an electrical failure. This issue occurred before the incident in Isla Nublar and was the last issue in the Return to Jurassic Park series before its hiatus. 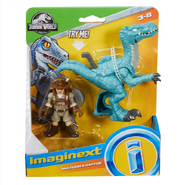 Retrieved from "https://jurassicpark.fandom.com/wiki/Robert_Muldoon?oldid=263159"
Community content is available under CC-BY-SA unless otherwise noted.