Roxie is a character in the Netflix series, Jurassic World: Camp Cretaceous. Her character is voiced by Jameela Jamil.

Roxie is the head camp counselor at Camp Cretaceous who is joined by Dave. She is seen guiding the kids through activities and making sure everyone is following the rules. She unfortunately has to deal with the campers constantly getting in danger. When the Indominus rex escapes, she and Dave are in waiting to talk to Claire Dearing to discuss the need for more staff at the camp due to the incidents. She wonders why it has been so long, picking the lock of a cabinet revealing sets of ACU walkie-talkies. She hears roaring and screams over the radios, and the life monitors turn red. Realizing something has gone wrong, she and Dave set out to find the kids, tracking their ACU Ipad. They always remain just five minutes behind them and are eventually forced to board the evacuation ferries by a staff member. Roxie and Dave are last seen attempting to turn the boat around to return to Isla Nublar and pick up the campers, but fail to do so. She and Dave most likely made it back to the mainland safely afterwards, and what they did afterwards is unknown.

Roxies voice is heard over Dave's demo which was found by Kenji, located in the campers old bunks.

Roxie doesn't appear, but Darius reminds Kenji that Dave and Roxie saved them from the Velociraptors, when they encounter Blue.

Roxie finally makes her apperance in the final season, along with Dave.

Roxie is more organized than Dave, and skilled at keeping things on schedule. She is very concerned about the campers and is quite hot-headed. Roxie displays more focus then Dave prior to the incident. 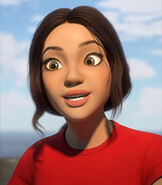 Roxie catches the loose lone Compy with a blanket, while it's struggling to free itself while she's holding and comforting it.