Salvation is the fourth episode of the second season in the Netflix series, Jurassic World: Camp Cretaceous. The episode was released on January 22, 2021.

A bonfire in the distance signals that the campers have company: a pair of posh eco-tourists and their disgruntled security guy. But can they be trusted?

The campers rush headlong through the woods toward the distant firelight, but it goes out just before they can reach it. Worse, a Ceratosaurus arrives and tries to eat them, but at the last moment Hap arrives, blasting away at the dinosaur with a flare gun until it flees. Hap, along with Tiff and Mitch, turn around and greet the campers, introducing themselves as eco-tourists (Hap being their "highly recommended" guide). They take the campers back to their own campsite, full of a great deal of modern amenities that bedazzle the campers.

The campers sit down for a feast of a breakfast as they relay their story of hardship to their saviors, Ben's loss hitting them all particularly hard. However, the eco-tourists assure them that they'll be taken home in two days, which cheers them again. Darius and Mitch get along excellently, but Brooklynn soon becomes suspicious of Hap, due to his abrasive and solitary attitude. Further, he almost takes her card key from her, but soon relinquishes it.

Even as everyone enjoys the amenities of the encampment, Brooklynn decides to try to break into Hap's tent, raising an alarm and nearly causing a fight. Darius tries to make Brooklynn back down, but she brings up Darius' father by accident, so he leaves in anger, along with everyone else except Kenji. Together they go to break into the yurt again, only to see Hap right at the entrance, who detains them. Meanwhile with everyone else, Mitch takes more pictures of dinosaurs and Darius offers to take him to the watering hole.

Back at camp, Hap watches Kenji and Brooklynn like a hawk, but he takes off to answer a call when he sees that Brooklynn is apparently asleep. Even as Hap argues with Tiff, causing everyone to start coming back early, Brooklynn decides to flee the camp with Kenji, prompting Hap to chase after them. Even as everyone else returns to an empty camp, Hap finally closes in on Kenji and Brooklynn, only for Ben Pincus to reveal himself and knock Hap unconscious.

Hap, Tiff, and Mitch drive off a dinosaur 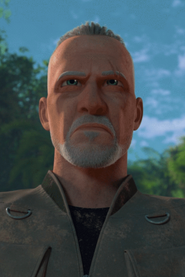 Brooklynn when Kenji complains about other people flouting their wealth, something he does constantly

Hap knocked out by Ben Pincus
Add a photo to this gallery
Retrieved from "https://jurassicpark.fandom.com/wiki/Salvation?oldid=260702"
Community content is available under CC-BY-SA unless otherwise noted.