Sammy Gutierrez is a main character in the Netflix series, Jurassic World: Camp Cretaceous, and later a revealed spy for Mantah Corp. Her character is voiced by Raini Rodriguez.

Sammy is a guest of Jurassic World. She attends Camp Cretaceous. When asked by Brooklynn, she claimed she was attending Camp Cretaceous because the Gutierrez family supplied all the beef used to feed the dinosaurs on the island. At Camp Cretaceous, Sammy met five other campers there who were also participating in the camp. They engaged in several exciting activities at the camp, led by Roxie and Dave, the two camp counselors. Sammy and the others saw dinosaurs up close, drove a Gyrosphere, and made many incredible memories.

After disaster struck and the dinosaurs got out of containment, Sammy and the campers were left on their own to fight for their lives. They went on the run, trying to escape the dinosaurs. At one point, Sammy stole Brooklynn's phone which upset the other campers, most notably Yasmina, though Sammy felt guilty about hurting her. She was later found out to be a spy who worked for Mantah Corp to help her family's ranch from going into debt.

At the end of the season, Sammy managed to make it to a ferry port alive along with a few others. However, the ferry had already left; leaving the campers to fend for themselves on the abandoned island and thus marking the onset of the second season.

A Beacon of Hope

Sammy helps carry Yasmina Fadoula while the group flees from dinosaurs, until they eventually arrive at Main Street. Once there, Sammy uses a book to discover the existence of a distress beacon to call for help, and then helps to monitor a T-Rex so that Darius Bowman and Kenji Kon can activate the beacon while the T-Rex is away. After the beacon is activated and everyone moves to safety, she celebrates with everyone else.

The Art of Chill

After choosing their old camp as a base, Sammy heads off with Brooklynn and Darius to get medical supplies. At the medical station, Sammy frees several caged herbivores and argues with Darius over freeing the single carnivore, a Baryonyx. Their argument is interrupted by the arrival of several other carnivores, so Sammy releases the last herbivores to distract the carnivores while everyone escapes. However, Darius takes advantage of the chaos to free the Baryonyx, so Sammy gives him a dinosaur necklace in thanks.

Sammy accompanies Brooklynn and Yaz on the search for frozen flowers, talking about high school with Yaz until they get there. They discover an active vent beneath the flowers, so they continue on searching, this time with all three talking about a TV show they like until they arrive at a genetics lab. They look around until a Baryonyx group, some of which Sammy named, drives them out, although Sammy manages to recover the E750 manilla folder for Brooklynn.

The campers are later rescued by Tiff, Mitch, and Hap, who Sammy takes an initial liking to. She avails herself of the camp's modern amenities and goes with Tiff and Mitch on hikes to observe dinosaurs, leaving Brooklynn behind in anger for offending Darius. However, when she returns to camp, Hap, Brooklynn, and Kenji are mysteriously gone.

Sammy begins to suspect their "saviors", and decides to distract them with Yaz while Darius can figure out what's happening. Sammy ends up captured by Tiff and used as a hostage to force Darius to reveal the location of the watering hole. She eventually tries to escape when a dinosaur scatters everyone, but she ends up recaptured again.

Darius comes up with a plan for him and Sammy to steal Mitch and Tiff's guns. When they reach Main Street, Sammy helps Darius drop a bookshelf on top of the hunters, then snatches the guns and runs away with Darius. A lengthy game of hide and seek ensues, but eventually the hunters manage to find them; however, the sudden restoration of electricity distracts them long enough for Sammy and Darius to slip away again. Indominus Rex then arrives and causes havoc, eventually allowing the hunters to recover the guns and escape. Rex nearly eats Sammy and Darius, but suddenly the hologram of Rex reactivates and distracts the real Rex long enough for Sammy to escape with Darius. She's then hailed by a megaphone, from which emits Kenji and Brooklynn's voices, asking what's going on. Although they have some difficulty, having no audio input, Sammy manages to tell her friends that the hunters are on the way to the watering hole.

Sammy gets picked up by Kenji and together they go to meet up with Ben and Yaz, whereupon they all start blasting music and flashing lights to drive the dinosaurs away from the watering hole and into a stampede. However, the Tyrannosaurus sends them stampeding right back, and Sammy notices that Yaz's car has stalled. She and Ben pick her up on Bumpy, and then flee from Rex. After losing Rex, they regroup at the docks and Sammy joins in a huge group hug.

In season 1, Sammy is known as being gregarious, loud, and filled with enthusiasm for the experience of being at Camp Cretaceous. Her friendly demeanor causes her to befriend Yaz, arguably the most determined introvert in the group. She cares deeply for those close to her such as her friends and especially family, going as far as running away to work as a illegal spy to help her family, showing guilt over hurting Yasmina after it was revealed she stole Brooklyn's phone, and being struck with grief over Ben's supposed death, even denying it and wishing to look for him.

In season 2, Sammy continues to bond with her fellow campers, most notably Yasmina.

Sammy has brown eyes. She has black curly brushed hair, a single bang on left side above her left eyebrow and wears a dark pink hairband. She wears a black jacket (in the 1st and 2nd episodes of Camp Cretaceous and Secrets respectively) later the jacket has been replaced by a white tank top with dark pink flowers and dark green leaves while during stranded on Isla Nublar, also wears dark blue jeans and light brown boots. By the start of season 3, her hair has grown more voluminous due to the unkempt temperatures of the island.

In the episode "Safe Harbor" Sammy wears a two-piece swimsuit; the upper half being orange, and the bottom half being a dark magenta color, almost purple. 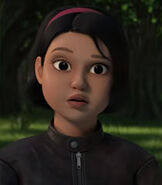 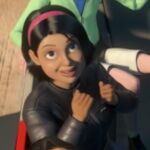 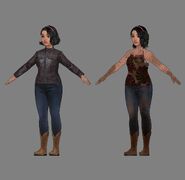 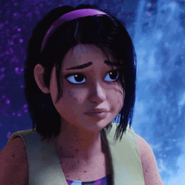 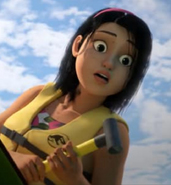 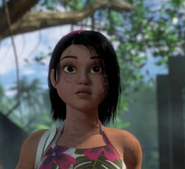 Sammy placed her hand on the Sinoceratops

Sammy gently strokes her hand on the lost baby Brachiosaurus

Sammy being friendly and comforting the baby Brachiosaurus later till Brooklynn and Yaz comfort it too.

Sammy smiling at Bumpy by giving her a bucket of water.