Dr. Sarah Harding is an animal behaviorist who specialized in animal behavior which also included the dinosaurs. In both canons, she joined the Research Team led by Ian Malcolm, with whom she has a relationship in the film, to Isla Sorna.

While she is confirmed to be the daughter of Dr. Gerry Harding in the film canon, and has a half sister Jessica Harding, both of whom were involved in the Jurassic Park Incident and its aftermath, her relationship with Gerry Harding is only implied in The Lost World.

In Jurassic Park: The Game, an angry Jess Harding remarks to her father Gerry Harding he hasn't spoken to Sarah for over a year during an argument, revealing that Gerry Harding is Sarah's estranged father from a previous failed marriage and that Jess is her younger half-sister.

In The Lost World: Jurassic Park, Sarah joined a small team of researchers on Isla Sorna on John Hammond's request. She displayed an array of knowledge in both living animals, having researched at the San Diego Zoo, and dinosaurs, understanding the anatomy of the leg muscles of the infant Tyrannosaur she successfully treated. She was joined later in the expedition by Ian Malcolm, with whom she had an ongoing relationship, and his daufants as soon as they could. Despite their rivalry, she endured Burke's behavior and even tried to save Burke when he was panicked into the Tyrannosaur's mouth after he saw a snake slithering into his shirt. The Tyrannosaurs stalked the group for a time, because Harding's jacket was covered in blood from when her and Nick Van Owen set the infant's leg. She and Malcolm survive the expedition.

She was also present at the San Diego Incident and tranquilized the male adult Tyrannosaur before it could be killed by large animal control. She was last shown in the film asleep with Malcolm on his couch while Hammond commented on the Incident on television.

Sarah has generally been portrayed as an intelligent and adventurous character with a free spirit and a strong sense of independence. She has repeatedly shown no fear of wandering into the habitats of animals and dinosaurs alone and interacting with them directly, and has also been shown to be willing to stand up for her beliefs, as shown in the film by her insistence to Robert Burke that Tyrannosaurs do not abandon their young.

In both versions of the character, she is dependable and capable as well as very compassionate, heroically rescuing other characters and trying to ensure their safety, only endangering the lives of her human companions when trying to help the life of an animal, such as when she assisted the baby Tyrannosaur's injury. In the film, her most notable achievement was tranquilizing a bull Tyrannosaurus in San Diego before the Animal Control unit could kill it, ensuring the Tyrannosaur family's survival. 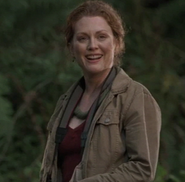 Sarah and a baby Stegosaurus

Sarah breaks into the InGen Hunters's camp in a deleted scene 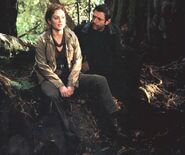