Jurassic Park Wiki
Register
Don't have an account?
Sign In
Advertisement
in: Sauropods, Dinosaurs of North America, Dinosaurs Discovered in the 2000s,
and 11 more
English

Egg
Sauroposeidon (meaning "earthquake god lizard", after the Greek god Poseidon) is a genus of sauropod dinosaur known from several incomplete specimens including a bone bed and fossilized trackways that have been found in the American states of Oklahoma, Wyoming, and Texas. The fossils were found in rocks dating from near the end of the Early Cretaceous (Aptian–early Albian), a time when sauropod diversity in North America had greatly diminished. It was the last known North American sauropod prior to an absence of the group on the continent of roughly 40 million years that ended with the appearance of Alamosaurus during the Maastrichtian. Sauroposeidon is the natural prey of Acrocanthosaurus.

Sauroposeidon appeared in the website Jurassic Park: Institute on Dinopedia. 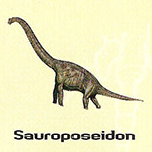