Scan Command: Jurassic Park features an evil scientist, Dr. Irene Corts, who has taken over the Jurassic Park theme park with her army of genetically-altered dinosaurs and plans to use them to achieve world domination.

Players actually take control of dinosaurs (with the "starter dinosaur" being a Velociraptor, while others, such as a Spinosaurus, a Triceratops, a Tyrannosaurus rex, etc., become unlocked as more levels are completed) in their mission to not only stop Corts, but to also locate five children and help them to escape Jurassic Park. The game features seven levels, including caves, jungles, swamps, dilapidated InGen labs and steel pyramids, while the final level is set inside an active volcano.

The game included a portable, battery-powered barcode scanner, known as the Scan Command. It is capable of storing up to 25 scans at one time. Barcodes are scanned by the player in order to obtain "genetic codes". This is done by scanning a barcode, then using a special connector cable (also included with the Scan Command) to connect the scanner to a computer's serial port to load the barcode into the game; once loaded, the barcode is transformed into dinosaur DNA as part of a puzzle minigame. Once completed, the "genetic codes" can then be used to customize the player dinosaur by enhancing traits such as attacks and defenses, or agility and strength. Through the scanners, players can also trade stored barcodes with one another. Also, after reaching a certain "power level", the player's dinosaur can fight in real-time battles against the other dinosaurs that are being controlled by evil scientists at InGen. In addition to defeating enemy dinosaurs, the player must also solve various puzzles, in order to advance further into the game. 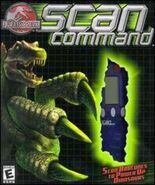 An image of the Scan Command accessory included with the game
Add a photo to this gallery
Retrieved from "https://jurassicpark.fandom.com/wiki/Scan_Command:_Jurassic_Park?oldid=163651"
Community content is available under CC-BY-SA unless otherwise noted.