"The lights around it go dark, and a puff of smoke rises from the base. Above in the cylinder, blueish light surrounds a dark mass. Thornlike spikes protrude along one side. The blueish light dims.""
—{{{2}}}([[|src]])

Scorpios rex (Codename E750), also misspelled Scorpius rex, is a dinosaur hybrid[2] that was frozen and held in InGen’s secret tunnels until it escaped. It is the central antagonist of Jurassic World: Camp Cretaceous Season 3. There are two individuals: the first one cloned by Henry Wu, with the second one being asexually reproduced by the original.

The Scorpios rex is depicted as a medium-sized theropod, smaller than Indominus rex but larger than the Indoraptor and Velociraptor. Both individuals were adorned with charcoal black scales. Its features are heavily deformed and grotesque, which Simon Masrani determined made it unfit for display. These traits included a brachycephalic muzzle, red eyes with slit pupils set high on its skull, a prominent overbite and jagged, uneven teeth. It has venomous spines on its elbows, tail and neck due to its scorpion fish DNA, which can detach and embed in an opponent's flesh in a manner similar to that of a porcupine. Simon Masrani called it "too ugly to put on display to the rest of the park."

Much like the Indoraptor, it has opposable thumbs and grasping talons, which enable it to climb and ambush prey from above. Its semi-prehensile tail also aids it in climbing. Similar to the I. rex It has infrared vision which can detect the heat signature of its prey. The Scorpios rex also has a pair of short spurs growing out of the back of its heels.

The hybrid had the ability to reproduce asexually due to frog DNA. As a result the single S. rex managed to give birth to another of its species. Paired with fact that the Scorpios rex also had accelerated growth, the population of the deadly creature would've increased rapidly if left unchecked.

The Scorpios rex appears to suffer from neurological and respiratory ailments; its behavior is calm and placid one minute, before switching to hyper-aggressive and unpredictable the next, and Kenji likened its labored breathing to that of a pug. In spite of these ailments, it is an extremely deadly hybrid, shown to outrun a Gallimimus, effortlessly dispatch a Ceratosaurus and replicate itself via parthenogenesis. The Scorpios Rex was shown to be mindlessly violent and apparently ruthless like the Indominous Rex, since it mainly killed its victims rather than eat them, even leaving some of its victims' corpses around the island in a grotesque view, one in particular being a Gallimimus attached to a tree with the Scorpios' poisonous quill still intact.

It is also easily distracted by noise and fire, the latter of which fascinates it. Its highly aggressive nature also cause it to attack its own offspring, as demonstrated when both individuals decide to fight each other to the death.

Dr. Henry Wu, under the acknowledgement of Simon Masrani, attempted to create a hybrid dinosaur. The Scorpios rex was the first successful hybrid dinosaur to be created, under request of Eli Mills. There may have been many attempts to create the Scorpios rex, as the notes that Brooklynn holds in "The Watering Hole" had incrementing numbers on each page: 1309, 1310, 1311 and, much later in notes, E750. Pages 1309 and 1310 show combinations of the letters used in DNA sequences but are not grouped as DNA sequences. It was the first genetic hybrid dinosaur created by Dr. Wu, preceding the Indominus rex and Indoraptor. Despite many setbacks and Masrani claiming the dinosaur was too grotesque to be put on display, Wu insisted on keeping the hybrid. However, one day, after barely surviving an attack from the hybrid, Wu eventually came to realize that with the Scorpios' mindless aggressiveness, it was far too dangerous to be set loose, let alone placed as a park attraction for the public. With Masrani and Mills deeming the creature to be too unstable, Wu shut down the project and kept the Scorpios in a cryogenic sleep, intending to never release it. This secret was heavily guarded, so very few people actually knew of the hybrid's existence.[3][4]

The animal is first mentioned in Season 1 during Brooklynn's search through Henry Wu's computer, in a folder labeled "E750 Clinical Trial Results". Later in the season, Eddie indirectly references the Scorpios rex when he was telling the kids that Wu was creating monsters that nobody knew about.[5] He was also one of the people whom, when Henry Wu was attacked by the Scorpios, brought him the antivenom for the poisonous quills.[3]

In Season 2, Kenji Kon repeatedly clicked a button that short-circuited the creature's containment tube, causing the cryogenic chamber to heat up and crack open.[6]

After the deaths of Mitch and Tiff, a Compsognathus ripped through a cable which contributed to keeping it frozen. The Scorpios rex's screech/roar is later heard as the screen goes black, presumably as it breaks free, roaming through the island.[7]

As of Season 3, the Scorpios rex escaped its containment and had asexually reproduced, causing 2 Scorpios rex to roam the island.[8] In its first appearance, the hybrid takes down Ceratosaurus and then runs away.[9] In its second appearance, it’s spotted by a drone, which the dinosaur then destroys.[10]

Later on, Darius finds a dead Gallimimus cached in a tree which was hunted by the Scorpios rex. As a result of the hybrid's rampage, the group notice that the Compies are avoiding their camp and other dinosaurs are acting uncharacteristically, moving to areas they normally would not go.[11]

The Scorpios rex causes a stampede among the herbivorous dinosaurs of the Isla Nublar, killing a Brachiosaurus during the attack, which unfortunately can't flee fast enough to escape the hybrid. The Scorpios rex also indirectly causes the death of a Sinoceratops when the panicked ceratopsid crashes with its head against a rock on its flight and died.[11]

When the Scorpios rex finds the kids in their camp, it tries to attack them; finding that the fence is electrified, it jumps the fence and attacks them from above. It is only stopped from attacking the group when fire from a lightning strike catches its attention and noise from other dinosaurs causes it to investigate.[11]

After the hybrid leaves, Sammy begins to feel dizzy and notices the quills from the Scorpios rex in her abdomen.[11] Yasmina is chased by the Scorpios rex when she runs to the lab to obtain the antidote for Sammy. During this chase, Yasmina is saved by Ben and Darius when they use gasoline to destroy the gondolas in order to catch its attention.[12]

Later on, the Scorpios rex attacks a herd of bioluminescent Parasaurolophus lux. It also tries attacking Bumpy, but the herd of Ankylosaurus defends her and drives it off, as their armor is too thick for the hybrid's quills to pierce.[12]

Darius and Ben later discover that the Scorpios rex that attacked them is not a solo but one of two, one of them having been reproduced asexually. Rather than team up and attack Darius and Ben, the two Scorpios attack each other. Hiding in the limo taken from Kenji's penthouse, Darius and Ben are tossed about inside the car as the two hybrids violently fight it out.[8]

After the two hybrids flee, Darius and Ben reunite with the rest of the group, planning on figuring out a way to kill the hybrids due to the damage they cause and the danger they present. To that end, Darius finds the tranquilizer gun left behind in an encounter with Blue and plans to use it to sedate the Scorpios rex. When they locate the gun in the old Jurassic Park Visitor Center, they are attacked by one of the Scorpios rex. Darius tries to shoot it and misses, with the resulting attack catching Blue's attention and that of the second Scorpios rex. Darius earns Blue's trust by refusing to use the gun and Blue distracts the two hybrids by fighting them, causing a three-way battle between her and both hybrids. Removing the metal scaffolding that supports the building roof, the campers and Blue escape the Visitor Center together as both Scorpios rex are crushed and killed when the ceiling collapses on top of them.[13]

When Dr. Wu returns to collect DNA for Eli Mills to create the Indoraptor, Wu realizes the Scorpios rex escaped after finding the campers of Camp Cretaceous back on Isla Nublar as he searches for his laptop.[4] During an encounter with the campers, Brooklynn tells Wu his creation is a monster and to stop making hybrids, informing him of the creature's ability to self-reproduce; she then tells Dr. Wu how they managed to kill both creatures, both shocking and morally concerning Wu. When the group destroys Dr. Wu's laptop while rescuing Brooklyn, any hope of recreating the Scorpios rex is lost, rendering it extinct and marking an end to its existence forever,[14]

Through the eyes of the Scorpios rex using infrared - its reveals that it hunts by seeing the heat signature of an animal, in this case a Galimimus

Scorpios rex roaring in the rain

Pouncing on the kids

The Creature becomes entranced by the burning tree

The Scorpius rex notices Yaz near the raptor pen

The Scorpius Rex looking and curious at Yaz when she was bravely yelling loudly at him.

Plot twist - There are two of them

The two hybrids, moments before thier demise

The deaths of both Scorpios rex after they were crushed to death after the old Visitor Center collapsed. The right arm and jaws were seen.

The first on-screen victim of the monster, a Ceratosaurus 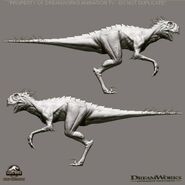 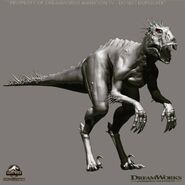 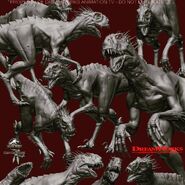 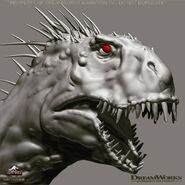 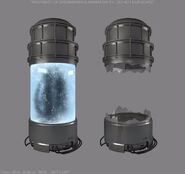 Close-up of the eye

Through the eyes with the Scorpius rex while it's in the tree, and sees Darius underneath till he looks up at it