Start a Wiki
The Nitro Express Double Barrel Rifle is a large-caliber rifle carried by Roland Tembo in The Lost World: Jurassic Park, It is a large caliber rifle popularized in the early 1900's by ivory hunters. These rifles are often referred to simply as a "double," referencing the two barrels per single rifle. Double rifles are the favored rifle for African professional hunters as the two barrels allow for a quick follow-up shot on animals without having to reload. Two rifles were made for the production of this movie by B. Searcy & Co. of Boron, CA. Steven Spielberg is said to own one of them himself. The location of the other is unknown. Both rifles made for the movie are real and fully functional. As with all double rifles, the intense amount of time and labor to make them dictates a price tag of several tens-of-thousands of dollars. A plastic model was made as well for stand-ins when the real rifle, which is heavy, was not necessary. 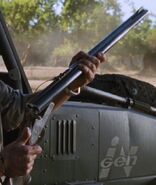 Roland discovers the bullets to his rifle are missing.
Add a photo to this gallery
Retrieved from "https://jurassicpark.fandom.com/wiki/Searcy_Double_Barrel_Rifle?oldid=222235"
Community content is available under CC-BY-SA unless otherwise noted.