Shunosaurus was a relatively small sauropod from the Late Jurassic Period. It was 9.5 meters (31 feet) and 3 tons, and unlike most sauropods, had a short neck and a club on its tail. This means that the tail would have been Shunosaurus primary weapon to use as a defense against predators such as Gasosaurus.

Shunosaurus appeared in the website Jurassic Park: Institute on Dinopedia.

Shunosaurus is number 51 of the Herbivore Twos that can be created in Jurassic Park III: Park Builder. 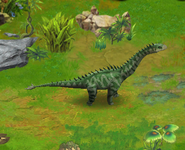 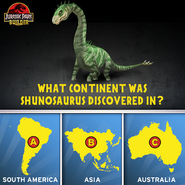 Shunosaurus appears in Jurassic World: The Game. It originally wasn't in the game but since August 4, 2015 it can be created for the player's park by unlocking it in the Level 53 battle arena. 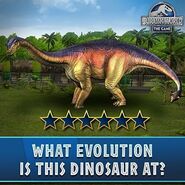 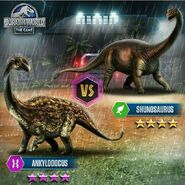 Concept of a max level Shunosaurus. 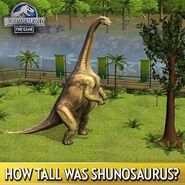 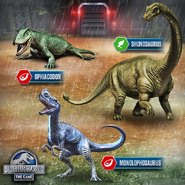 Shunosaurus is mentioned by the Truck Tour announcer when describing the Ankylodocus. It is also mentioned in the database entry for the hybrid.