Sinoceratops is a genus of ceratopsian that lived in China during the Late Cretaceous, living about 72 million years ago.

Sinoceratops is a very significant centrosaur because not only it is the first ceratopsid to be ever discovered in China, but it is also one of the largest centrosaurines ever discovered. It lived alongside Shantungosaurus, Zhuchengtyrannus, and Zhuchengceratops.

Sinoceratops was cloned by Ingen by 2014 for their theme park Jurassic World on Isla Nublar, with at least one herd being kept near the park's Camp Cretaceous kids camp. These clones look incredibly similar to their real life counterparts except the clones has its fenestrae exposed on the living creature, which no ceratopsian had, a taller frill, is much larger than the original, being 8.1 meters (26.57 feet) instead of 6 meters (20 feet) when fully grown, has a dew claw on the back legs, and two spikes on the center of the frill similar to that of a Pachyrhinosaurus. The genome for the Sinoceratops was recreated with an amalgam of ceratopsian DNA, including that of Pachyrhinosaurus.[1] Their coloration is a bright forest green, a white underside and face, and a circular orange, white and green pattern beneath the holes in the frill and on the sides of the frill.

In December of 2015, the first batch of summer campers visiting Camp Cretaceous witnessed a mixed species herd which included Sinoceratops moving near their viewing tower and underneath their zipline attraction.

Two days later, these same campers came watched as their counselors moved the herd to a separate grazing area. As this was underway, a storm rolled in, which spooked the herd and caused the counselors to leave the kids briefly to get radio contact. While they were away, a Sinoceratops panicked and broke from the herd, causing the campers to attempt and corral it back to the herd until it turned on Darius Bowman and Brooklynn's Gyrosphere, breaking it and all of the kids Gyrosphere's into the nearby jungle. Darius and Brooklynn's Gyrosphere landed in a mud pit, where the hole created by the dinosaur caused it to fill up with mud and sink. In order to save them, Sammy Gutierrez calmed down the Sinoceratops with berries and coursed it into a makeshift rope for a pulley system, which successfully freed the trapped Gyrosphere. Sammy rewarded the Sinoceratops with more food, but also took a saliva sample of the animal and sent it off to InGen's rival company Mantah Corp.

Shortly after the Jurassic World Incident in 2015, a Sinoceratops was hunted by the big game hunter Mitch, who kept his groomed head in his tent as a trophy.

Later that year, several Sinoceratops were among the dinosaurs in the stampede attempting to escape the Scorpios rex. One individual fatally crashed headfirst into a large rock that Sammy and Brooklynn were hiding behind. Another Sinoceratops was attacked and poisoned by the Scorpios but managed to escape until it collapsed near Darius. In order to save it, Darius found the venomous quill lodged into the ceratopsid and yanked it out. Startled, the Sinoceratops lashed out at Darius and forced him to run off.

After receiving the Sinoceratops sample from Sammy, Mantah Corp utilized the DNA and combined it with that of their Spinosaurus to create the hybrid Sino-Spino.

'Sinoceratops populations survived on Isla Nublar survived until 2018, when the island's volcano became active and showed signs of a potential eruption.

When the Dinosaur Protection Group arrived on Isla Nublar in an attempt to rescue many of its dinosaurs as Mount Sibo began erupting, one Sinoceratops encountered a paralyzed Owen Grady and licked his face before being scared off by some approaching lava. As the eruption worsened, a multispecies stampede including multiple Sinoceratops broke out, with one being attacked by a Carnotaurus. After a brief fight, the Sinoceratops is able to break away and flee with the other dinosaurs.

Several Sinoceratops were captured by Ken Wheatley and his mercenaries, where they were taken to the Lockwood Manor along with to be auctioned off. After multiple events forced the auction to close halfway through, toxic gas began leaking into the remaining dinosaur's holding area. With no way to remove the gas, Claire Dearing and Maisie Lockwood released the dinosaurs into the wild.

By 2022, the Department of Prehistoric Wildlife had a confirmed sighting of a Sinoceratops in Calliham, Texas by a Tiktoker. Later that year, a herd of Sinoceratops, Triceratops, and Nasutoceratops were held in an illegal breeding facility. The herd was spooked by a group of personnel in pursuit of Claire, Zia Rodriguez, and Franklin Webb, who had recently stolen a sick juvenile Nasutoceratops from them. The herd charged the poachers and knocked over their vehicles, allowing Claire and her group to escape. Another Sinoceratops and its young were later witnessed traveling along with African Savannah Elephants in Africa at the very end of the film. 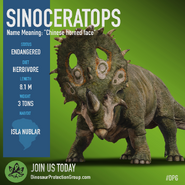 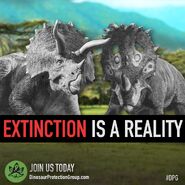 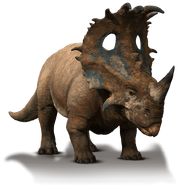 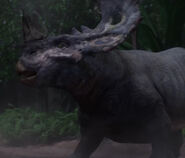 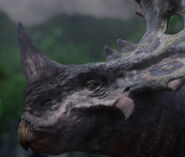