Sinoceratops is an unlockable dinosaur in Jurassic World Evolution added in the Fallen Kingdom DLC.

Sinoceratops fossils are unlocked once the player reaches a high enough rating with the Entertainment Division on Isla Matanceros.

"The Sinoceratops has a large elaborate frill pattern surrounded by smaller tusks. They are about the same weight as our modern rhinos."

"Sinoceratops is a ceratopsid dinosaur. She is significant as the first known ceratopsid found outside of North America."

Sinoceratops eat vegetation from ground herbivore feeders, and are capable of defending themselves against predators.

They form one of the largest ceratopsid social groups, although this is still smaller than many other herd herbivores. They tolerate a modest quantity of other dinosaur species in their territory.

They require a modest area of grassland, with a small amount of forest.

Sinoceratops was a ceratopsid dinosaur. Its name means "Chinese horned face". It is significant as the first known ceratopsid found outside of North America.

It had a short hooked horn on its nose, no horns above its eyes, and a short neck frill, with a crown-like appearance formed by forward-curving hornlets.

Three specimens of Sinoceratops have been found in the Xingezhuang Formation in Shadong, China, with the first discovered in 2008.

Sinoceratops was discovered in the same formation as the ornithopods Shantungosaurus and Huaxiaosaurus, and the theropod Zhuchengtyrannus, showing species parallels with ecosystems and food chains in North America around the same time. 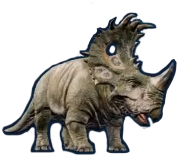 Add a photo to this gallery
Retrieved from "https://jurassicpark.fandom.com/wiki/Sinoceratops/JW:_E?oldid=229543"
Community content is available under CC-BY-SA unless otherwise noted.