Smithetoceras was a Snow Super Rare hybrid added to the Cenozoic Park in Jurassic World: The Game. It was available for a short while before being removed from the game. On 16th of July, 2019 the hybrid was officially leaked to be added in the game again. It was promoted to a Legendary Hybrid in Update 38. 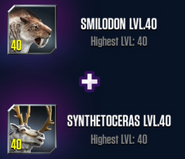 Add a photo to this gallery
Retrieved from "https://jurassicpark.fandom.com/wiki/Smithetoceras/JW:_TG?oldid=234060"
Community content is available under CC-BY-SA unless otherwise noted.