Their final stop is to head to Dr. Laura Sorkin's lab to pick her up for evacuation. On the way there, Nima and Oscar get into a feud, with Nima telling Jess what Oscar's tattoos mean. However, Gerry manages to break up a fight that looked like it was about to get ugly. When they reach Sorkin's lab, Laura is already there to meet them. While she tells Gerry that the power is down and dangerous dinosaurs are running around the island, she ensures Jess that there's nothing to worry about as the only dinosaurs in the area are herbivores, and that the area is cut off from anywhere else.

Oscar handcuffs Nima to the helicopter to stop her from escaping. When Yoder talks to Laura, she tells him that she will not be leaving with them off the island, ensuring that she's safe where she is. She tells them that they could help get rid of some of the files she's tried to send to InGen. Oscar threatens to take her by force, to which she threatens that she will have him in court if he does such a thing. To stop a potential fight, Yoder says that he and Oscar will move Laura's boxes. Jess goes with them, and when they reach the files, none of them want to move the files.

Yoder asks Oscar if he knows some dirt on Laura, as the only way that she may get off the island is to charm her. It is learned that Laura was once arrested for protesting in the 1970s for animal rights. Unfortunately, it's not enough to convince her to leave the island. Yoder asks Jess to find out some information about her in the file boxes. She learns that Laura wanted to turn the park into a dinosaur preserve. Yoder tries to use this information to convince her to leave, to which he is successful. But before she can leave, she must put some lysine in the water supply so that the herbivores would survive until she got back. 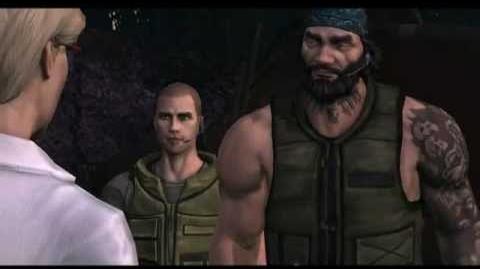 Jurassic Park The Game - Episode2 The Cavalry - Sorkin's Lab
Episode 2: Sorkin's Lab
Add a photo to this gallery
Retrieved from "https://jurassicpark.fandom.com/wiki/Sorkin%27s_Lab?oldid=133544"
Community content is available under CC-BY-SA unless otherwise noted.