Spinosaurus can be created in Jurassic World: The Game as a Super Rare carnivore.

It is unlocked by completing the Earth Shattering event. More individuals can be purchased in the market for 1,500 DNA or found through card packs.

A level 40 Spinosaurus can be fused with a level 40 Utahraptor to create the hybrid Spinoraptor.

"One of the largest carnivores, the Spinosaurus outweighs the T. rex by a ton. InGen's clone reached nearly 20 feet in length!"

"Did you know that Spinosaurus clones have two head crests, opposed to the single head crest of the original dinosaur?"

"The skull of the Spinosaurus measures at 6 feet in length, large enough to snap up a person without issue."

""The sail of InGen's Spinosaurus is also underdeveloped. The original dinosaur had a sail that was 6 feet high!" 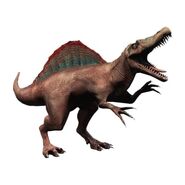 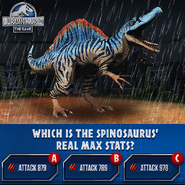 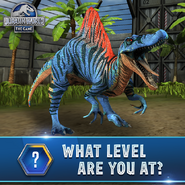 Add a photo to this gallery
Retrieved from "https://jurassicpark.fandom.com/wiki/Spinosaurus/JW:_TG?oldid=236232"
Community content is available under CC-BY-SA unless otherwise noted.