Stegoceras was a small pachycephalosaurid dinosaur that lived in North America during the Late Cretaceous period around 77.5-74 million years ago. This herbivore had an estimated length of up to 2 meters (6.6 feet) and weighed 10 kilograms (22 lbs) – 40 kilograms (88 lbs).

Stegoceras appeared in the website Jurassic Park: Institute on Dinopedia alongside its synonym Ornatholus.

Stegoceras appeared in Jurassic Park III: Park Builder as a Herbivore One.

Stegoceras appers in Jurassic World: Alive as the 3rd epic pachycephalosaur. Unlike the originals, the Stegoceras in the game has long feather bristles on it's tail like Psittacosaurus. 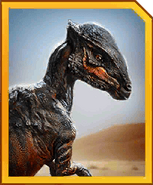 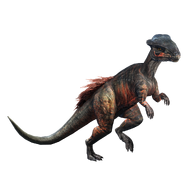