Stegoceratops is a hybrid of Stegosaurus, Triceratops, a beetle and a snake. Despite appearing in the toy line and game adaptation of Jurassic World, it did not physically appear in the film itself.

Stegoceratops is seen on one of the computer monitors inside the Hammond Creation Lab, but it is unknown if it was ever created.[2]

Computer screen with Stegoceratops on it. (Jurassic World)

Stegoceratops appears in Jurassic World: The Game. It appears as an opponent in one of the Battle Stages of Jurassic World: The Game. It was originally unavailable to obtain until June 10, 2015, only appearing in a battle stage. It can be created by fusing both a Level 40 Stegosaurus and a Level 40 Triceratops. Upon this fusing, it will be purchasable in the game's market.

Before the update on June 10, 2015 Stegoceratops had a nasal horn and a frill like Triceratops until this later update changed it to resemble how it looked in the concept art of Jurassic World. 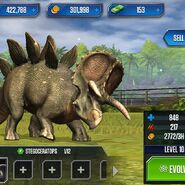 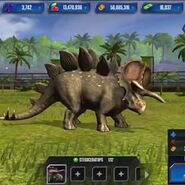 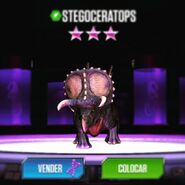 Level 29 Stegoceratops with an older model, one depicting horns that closer resemble Triceratops. 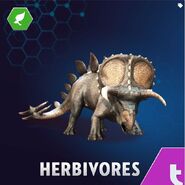 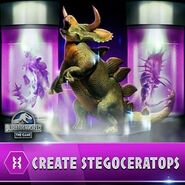 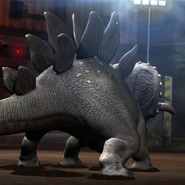 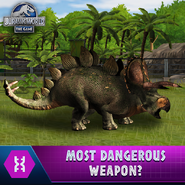 Stegoceratops appears in the level "Main Street Showdown" on a computer screen inside the Hammond Creation Lab like in the Jurassic World film. Gray Mitchell it on the computer screen and comments that it is not a real dinosaur.

The player can potentially create the Stegoceratops in the Dinosaur Customizer if they have the DNA of Triceratops and Stegosaurus.

Stegoceratops is featured in Jurassic World: Alive. Strangely, this version looks very different from how it is usually portrayed in JP Media, with a head looking more like Triceratops than a Nasutoceratops. 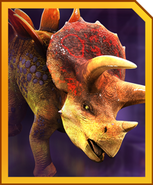 Stegoceratops was added to Jurassic World: Evolution through the Secrets of Dr. Wu DLC. Again, like how it was portrayed in Jurassic World: Alive, the head looks more like one of a Triceratops rather than a Nasutoceratops.

A figure of Stegoceratops is a part of Hasbro's Jurassic World toy line. Pressing down on its thagomizer causes its head to jut forward in a ramming motion. There two skin variations of the toy with one being dark green and the other being brown.[3] 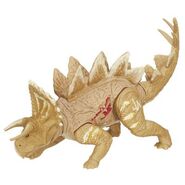 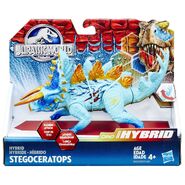 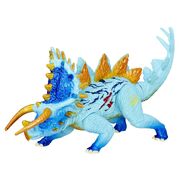 Stegoceratops was originally supposed to physically appear in the Jurassic World film in a scene where Owen Grady and Claire Dearing encountered it in the jungle, discovering that Dr. Henry Wu was making more hybrids in secret, but it was cut when the script was being written, due to Colin Trevorrow's son saying that if they had Stegoceratops along with Indominus rex, the I. rex would feel less special.[4]

According to early designs of the hybrids shown on the Creation Lab's computer monitor in Jurassic World, the beetle used in its creation gives it "exo-skeletal [sic] armour". Furthermore, one of the renderings says "GENE ASSET ID OWL #092345.435" which suggests that the film version of Stegoceratops might have owl DNA, though since this was never used in the film, it is unknown if this is canon. It also two different code names; these being "STEG.235" and "STEGA.324A-1", but these were ultimately never used and the computer screen in the final film instead shows "TRX REX.345-ALPHA" like with Indominus rex and the Pachycephalosaur-theropod hybrid.[5]

It is similar to an animal from a movie called Yor, the Hunter from the Future, in which there is a creature that had identical traits like the hybrid. Coincidentally, it is also called Stegoceratops. 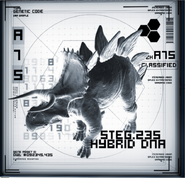 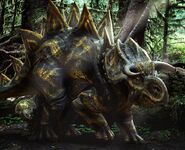