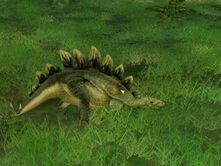 Stegosaurus appears in Jurassic Park: Operation Genesis as a four-star attraction. Its fossils are found in the Morrison Formation A (along with Dryosaurus and Ceratosaurus, just like in the real world. It is based on its appearance in Jurassic Park III. Stegosaurus can also have "Death Duels" with Tyrannosaurus rex, usually coming on top by swinging its spikes on to the T. rex's face, thus killing it. Tyrannosaurus will sometimes come on top by grabbing its neck and twisting it hard, very much like the Tyrannosaurus rex and Ankylosaurus death duel. This is possibly a reference to the battle between a Tyrannosaurus and a Stegosaurus in a segment of Walt Disney's Fantasia. It is a friend of Kentrosaurus and moves in herds with them. However, for most of the time, T. rex has a bigger chance in defeating Stegosaurus in Death Duel than Ankylosaurus.

Retrieved from "https://jurassicpark.fandom.com/wiki/Stegosaurus/Operation_Genesis?oldid=110938"
Community content is available under CC-BY-SA unless otherwise noted.