"Well, look who just woke up."
—Owen Grady when he first sees Stiggy.(src)

Stiggy is a Stygimoloch that appears in Jurassic World: Fallen Kingdom.

Stiggy is mostly reddish, with a creamy underbelly, some black lightning marks on her back and head, a white dome, dark grey spikes, a dark grey streak around her dome, dark grey and dark brown patterning all over her body.

In Stiggy's LEGO depictions, she is a bright orange with brownish black striped on her back and a brownish black coloring around the eye orbit, has a brown eye, creamy beak, and tan reddish brown underbelly. In Stiggy's toy depictions by Mattel, she is a bright orange with purplish markings on her back, and creamy underbelly. Her name was confirmed via one of the toys. In Stiggy's Funko Pop depiction, she is a dim orangish red with brownish purple markings with grey horns and spikes.

Stiggy and her kind has been confirmed to survive on Isla Nublar, although she and her species, alongside many other dinosaurs, is now facing an impending threat in the form of an erupting volcano.

When Owen Grady and Claire Dearing were imprisoned by Eli Mills and his men, Owen whistled to Stiggy in order to make her knock down the wall and the cage door, freeing all three of them in the process. She and Owen then proceeded to sabotage the Lockwood Manor Auction before escaping into the forest.

Despite her small size and herbivorous nature, Stiggy has a fiery personality and demanded respect. She has a "headbutt first and ask questions later" attitude to life. Her biggest button to push was whistling, as she'd enter an uncontrollable rage and be overcome with a desire to find the source of the noise and smash it to pieces. She also headbutted and rammed various auctioneers, as being in an unfamiliar environment while surrounded by large crowds of people greatly startled her. Stiggy is also shown to be docile towards Owen and Claire, possibly because they helped her in escaping captivity. 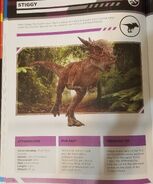 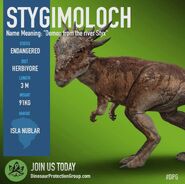