Struthiomimus ("Ostrich mimic") was an ornithomimid or ostrich dinosaur from southern Alberta, Canada. It's name derives from its resemblance to the North African Ostrich, Struthio camelus. It reached lengths of 3 to 4 meters (10 to 13 feet).

Struthomimus has been confirmed to appear in Jurassic World: Evolution. It is the first dinosaur species that players get in their parks. The main skin is mainly brown with a white underbelly, arms, neck and head, and darker brown stripes all over the sides of the dinosaur and a faint blue on the top of the head just behind the eye. It is inaccurately depicted as a herbivore, when it, in real life, is an omnivore. This is possibly due to their limitations that resemble a herbivore.

Struthiomimus is an Epic in Jurassic World Alive. 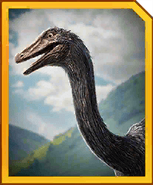