Stygimoloch ("demon from the river Styx") is a dubious genus of the pachycephalosaur family living in the Late Cretaceous period. It was distinguished from other pachycephalosaurs by the row of spikes on the back of its head, behind the dome characteristic of the family. Jack Horner has presented evidence in 2009 (and others after him) that suggests that Stygimoloch might be the juvenile form of Pachycephalosaurus.

It is revealed that there were surviving Stygimoloch populations on Isla Nublar, although they faced the impending danger, alongside many other creatures, in the form of an erupting volcano.

As it was not featured in any official Jurassic World material, the exact attraction in which it was included is not known. It could be that he was at the Pachy Arena attraction, alongside his taxonomic cousin Pachycephalosaurus.

It is smaller than the Pachycephalosaurus, but is more robust with a very thick neck. The head is really big compared to the body size, the spikes are slightly different in arrangement, has a goat-like pupil which is unlikely, the torso is too short, has a much larger dome on its head, the tail is too flexible, and has pronated wrists with claws on all five digits. The coloring is mostly reddish, with an creamy underbelly, some black lightning marks on its back and head, a white dome, dark grey spikes, a dark grey streak around its dome, dark grey and dark brown patterning all over the body.

At least five Stygimoloch were rescued from Isla Nublar, including an individual named Stiggy, who was maneuverd by Owen Grady into freeing himself and Claire Dearing from their cells in Lockwood Manor. Stiggy's escape disrupted the auction, thus preventing the sale of any more dinosaurs. The other Stygimoloch were eventually freed by Claire and Maisie Lockwood and escape the Manor alongside all of the other dinosaurs. 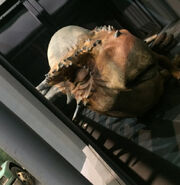 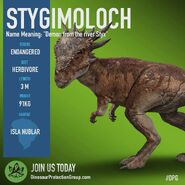 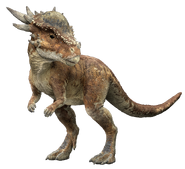