Supersaurus is a member of the sauropod family that includes Diplodocus was one of the largest plant-eaters of all time. At 33 meters long, it was almost as long as four school buses, and its neck alone was 40 feet long. Supersaurus is known from only a few bones, but these bones are enormous. The first bone found, a scapulacoracoid (shoulder bone) was over eight feet (2.4 meters) long. James Jensen, one of North America's most prolific dinosaur hunters, discovered this creature in 1973 and excavated it in 1979. Bones that were originally assigned to Ultrasaurus have now been identified as being from Supersaurus.[1]

Though no living animals of this species make an appearance in the film, Supersaurus is mentioned on a sign depicting the map of Gyrosphere Valley.

Supersaurus page.
Add a photo to this gallery

Supersaurus is a super rare herbivore. It is unlocked by beating battle stage 28 and once unlocked, it costed 1,400 DNA. The game has the Supersaurus in all evolutions have horns like a rhino which is inaccurate. 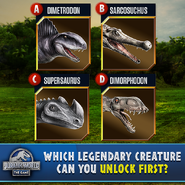 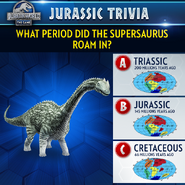 Retrieved from "https://jurassicpark.fandom.com/wiki/Supersaurus?oldid=237473"
Community content is available under CC-BY-SA unless otherwise noted.