Jurassic Park (film)/Scenes
The T. rex Rescue Scene is the very last scene of Jurassic Park. The group arrive in the main hall of the Visitor Center. They are attacked by The Big One and another Velociraptor. Before the velociraptors can pounce on the group, they are killed by the Tyrannosaurus rex.

It is unknown what this scene was called by the filming crew. It was titled Scene 137 and Scene 137A in the Jurassic Park Film Script. On the DVD's Extra Features/Storyboards this part is called Ending.

The scene is called (until further information is revealed) here T. rex Rescue, named after the title of its background music (see Jurassic Park (Film Score)).

Just as the Group have been cornered by The Big One and another raptor, the T. rex bursts through a hole in the unfinished structure, grabbing the raptor and distracting The Big One long enough to provide the group time to escape out the front door of the Visitor's Center. Seeing it's member being killed by the Tyrannosaurus, The Big Ones pounces onto her. Clawing and biting at her neck, The Big One topples into the T. rex's jaws where she is killed. The T. rex then tosses The Big One's corpse into a decorative skeleton, destroying the skeleton. The Tyrannosaurus rex then stands slightly upright and does one last victory roar and as she roars, a banner with the words "When Dinosaurs Ruled The Earth" banner falls in front of her. 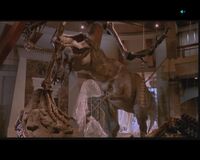 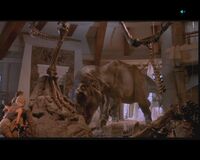 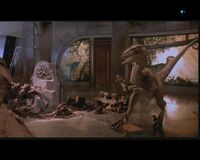 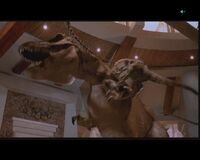 Originally, the T. rex wasn't planned to rescue the group in this scene. The group would hide in a crane. Alan Grant would use the crane to kill the raptors.

This scene became an icon of the Jurassic Park franchise. Therefore it is featured often in media.