Jurassic Park: The Game
Nima and Yoder are still running from the T. rex. They too reach the water tower, only to find a raptor eating a Parasaurolophus. In order to get inside the tunnels, they need to cause a distraction for the T-Rex. Nima uses herself as bait for the Raptor in order to use the Raptor as bait for the T. Rex. Her plan succeeds, as the T-Rex starts to feed, allowing her to escape, but just narrowly. When Yoder and Nima close the door behind them, Yoder tells Nima that he lost the canister and that it may have fallen out. Nima is furious about this. 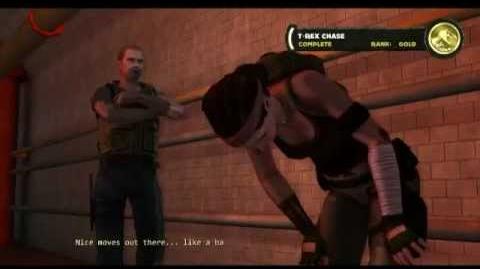